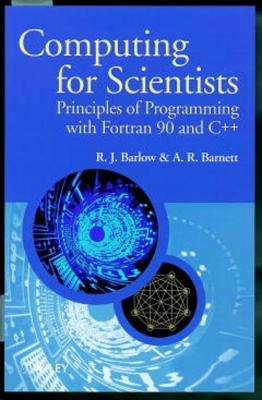 Principles of Programming with FORTRAN 90 and C++ (Manchester Physics #34)

The Manchester Physics Series General Editors: D. J. Sandiford; F. Mandl; A. C. Phillips Department of Physics and Astronomy, University of Manchester Properties of Matter B. H. Flowers and E. Mendoza Optics Second Edition F. G. Smith and J. H. Thomson Statistical Physics Second Edition F. Mandl Electromagnetism Second Edition I. S. Grant and W. R. Phillips Statistics R. J. Barlow Solid State Physics Second Edition J. R. Hook and H. E. Hall Quantum Mechanics F. Mandl Particle Physics Second Edition B. R. Martin and G. Shaw The Physics of Stars A. C. Phillips Computing for Scientists R. J. Barlow and A. R. Barnett Computing for Scientists focuses on the principles involved in scientific programming. Topics of importance and interest to scientists are presented in a thoughtful and thought-provoking way, with coverage ranging from high-level object-oriented software to low-level machine-code operations. Taking a problem-solving approach, this book gives the reader an insight into the ways programs are implemented and what actually happens when they run. Throughout, the importance of good programming style is emphasised and illustrated. Two languages, Fortran 90 and C]+, are used to provide contrasting examples, and explain how various techniques are used and when they are appropriate or inappropriate. For scientists and engineers needing to write programs of their own or understand those written by others, Computing for Scientists:
* Is a carefully written introduction to programming, taking the reader from the basics to a considerable level of sophistication.
* Emphasises an understanding of the principles and the development of good programming skills.
* Includes optional "starred" sections containing more specialised and advanced material for the more ambitious reader.
* Assumes no prior knowledge, and has many examples and exercises with solutions included at the back of the book.