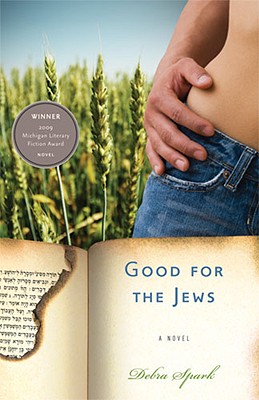 "Spark is at her sly, funny, and cutting best in her third novel, a clever and affecting variation on the biblical story of Esther."
---Booklist

"Spark's prose is tight, funny, insightful and occasionally heartbreaking as it probes the current education system, the arts and society's ills."
---Publishers Weekly

Good for the Jews is a smart, funny, sexy novel set in Madison, Wisconsin, during the Bush administration. Part mystery and part stranger-comes-to town story, Good for the Jews is loosely based on the biblical book of Esther. Like Esther, Debra Spark's characters deal with anti-Semitism and the way that powerful men---and the women who love them---negotiate bureaucracies.

At the core of the story of right and wrong are young, attractive Ellen Hirschorn and her older cousin Mose, a high school teacher who thinks he knows, in fact, what is "good for the Jews"---and for Ellen, too. Their stories intertwine with those of the school superintendent, his ex-wife and son, and a new principal. Workplace treachery, the bonds of family, coming of age, and romantic relationships all take center stage as the characters negotiate the fallout from a puzzling fire.

Spark's evocative writing style and sharp, understanding treatment of her diverse characters draw the reader into this surprising page-turner, a finalist for the 2009 ForeWord Magazine Book of the Year Award.

Debra Spark is the author of two previous novels, The Ghost of Bridgetown and Coconuts for the Saint, as well as Curious Attractions: Essays on Fiction Writing. She's been a fellow at Radcliffe College's Bunting Institute and a recipient of a National Endowment for the Arts award. Her short stories, essays, and reviews have appeared in publications including Food and Wine, Esquire, the New York Times, the Washington Post, and Yankee. She is a professor at Colby College and teaches in the MFA Program for Writers at Warren Wilson College. She lives with her husband and son in North Yarmouth, Maine.