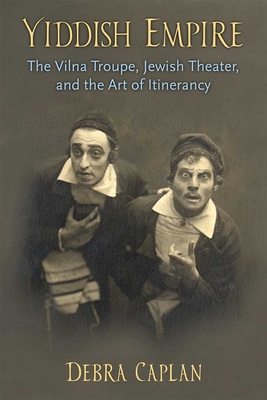 The Vilna Troupe, Jewish Theater, and the Art of Itinerancy

Yiddish Empire tells the story of how a group of itinerant Jewish performers became the interwar equivalent of a viral sensation, providing a missing chapter in the history of the modern stage. During World War I, a motley group of teenaged amateurs, impoverished war refugees, and out- of- work Russian actors banded together to revolutionize the Yiddish stage. Achieving a most unlikely success through their productions, the Vilna Troupe (1915– 36) would eventually go on to earn the attention of theatergoers around the world. Advancements in modern transportation allowed Yiddish theater artists to reach global audiences, traversing not only cities and districts but also countries and continents. The Vilna Troupe routinely performed in major venues that had never before allowed Jews, let alone Yiddish, upon their stages, and operated across a vast territory, a strategy that enabled them to attract unusually diverse audiences to the Yiddish stage and a precursor to the organizational structures and travel patterns that we see now in contemporary theater. Debra Caplan’s history of the Troupe is rigorously researched, employing primary and secondary sources in multiple languages, and is engagingly written.

Praise For Yiddish Empire: The Vilna Troupe, Jewish Theater, and the Art of Itinerancy…

“Marvelously ambitious in scope, consolidating in one volume the vast and diverse elements of the Vilna Troupe’s history. Caplan is an excellent storyteller, and clearly conveys the energy and excitement that characterized the Vilna Troupe at its best.”
—Henry Bial, University of Kansas

“A highly enjoyable book that will be of interest to aficionados of Yiddish theater and others with an interest in the history of Yiddish culture. The Vilna Troupe’s story is a great one, and Caplan tells is with verve and enthusiasm.”
—Jeffrey Veidlinger, University of Michigan

Debra Caplan is Assistant Professor of Theater at Baruch College, City University of New York.
Loading...
or
Not Currently Available for Direct Purchase