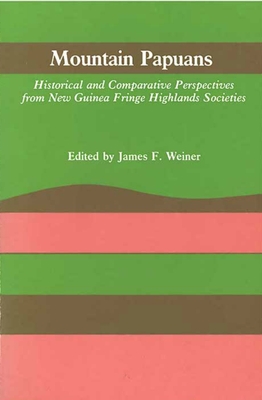 An important contribution to the Melanesian literature, Mountain Papuans examines three societies of the southern New Guinean Fringer Highlands. These societies--the Daribi, Foi, and Etoro--are distinguished from Cental Highlands societies by low population density, a complex subsistence system, and the marked elaboration of males ethos and male cult activity. In focusing on both the common and distinctive characteristics of these societies, contributing editor James F. Weiner and ethnologists Roy Wagner, Charles M. Langlas, Raymond C. Kelly, and Andrew J. Strathern not only describe a culture area, but also question generalizations that have been made about Highlands societies themselves. Challenging the assumption that high-density, high-intensity Central Highlands societies represent the most complex examples of social evolution in interior New Guinea, Mountain Papuans argues that the low-density, low-intensity southern Fringe Highlands societies can be considered equally evolved and specialized.

The individual contributions to this volume employ a processual, diachronic perspective. Wagner focuses on the Daribi community as the working out of the organizational and conceptual implications of swidden horticulture. Langlas and Weiner show how the idioms of coresidence and sharing of land give shape to the Foi longhouse community. Kelly explores the Etoro system of pig husbandry, comparing it to Highlands systems and using that comparison to consider the role of the pig in the development of Highlands socioeconomic systems. As these analyses unfold, the distinctive features of southern Fringe Highlands subsistence, settlement patterns, community organization, and environment emerge as aspects of a single process of sociocultural articulation.