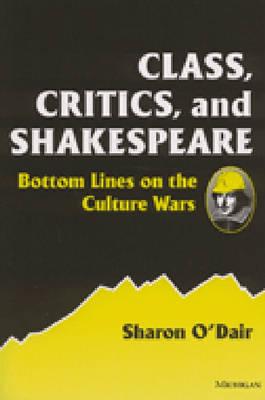 Bottom Lines on the Culture Wars

Class, Critics, and Shakespeare is a provocative contribution to "the culture wars." It engages with an ongoing debate about literary canons, the democratization of literary study, and of higher education in general.
For a generation at least, academic readings of literary works, including those of Shakespeare, have often challenged privilege based on race, gender, and sexuality. Sharon O'Dair observes that in these same readings, class privilege has remained effectively unchallenged, despite repeated invocations of it within multiculturalism. She identifies what she sees as a structurally necessary class bias in academic literary and cultural criticism, specifically in the contemporary reception of William Shakespeare's plays.
The author builds her argument by offering readings of Shakespeare that put class at the center of the analysis--not just in Shakespeare's plays or in early modern England, but in the academy and in American society today. Individual chapters focus on The Tempest and education, Timon of Athens and capitalism, Coriolanus and political representation. Other chapters treat the politics of cultural tourism and land-use in the Pacific northwest, and analyze the politics of the academic left in the U.S. today, focusing on the debate between what has been called a "social" left and a "cultural" left.
The author's quest is to understand why an intellectual culture that values diversity and pluralism can so easily disdain and ignore the working-class people she grew up with. Her provocative and heartfelt critique of academic culture will challenge and enlighten a broad range of audiences, including those in cultural studies, American studies, literary criticism, and early modern literature.
Sharon O'Dair is Associate Professor of English, University of Alabama.