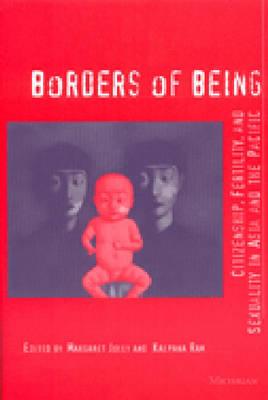 Borders of Being (Paperback)

Citizenship, Fertility, and Sexuality in Asia and the Pacific

Many have written about the way in which a "family romance" connects embodied daily life with the imagined community of the nation, and naturalizes the nation so that it appears not as a novel, fragile contingent creation, but as something ancient, robust and real. This book goes beyond such metaphoric associations of families and nations by looking at the central significance of planning families to promoting state development. It also considers the way that state power is accommodated and resisted, complicit with and contested by other powers grounded in relations of kinship, ethnicity, religion, and class.
Through an exploration of richly varied national histories, the authors highlight the common recurring intimacies between marking the borders of states and remolding the bodies of women as reproductive citizens. The tensions between past and present, between local, national and international concerns, and between men and women's interests in reproduction are all graphically revealed.
Surveying the relationship between the emerging models of citizenship and state population projects in several Asian states--India, China, Indonesia, the Philippines, Thailand, and the Pacific states of Papua New Guinea, Fiji, the Solomon Islands and Vanuatu--Borders of Being will attract readers in the several disciplines of anthropology, demography, and history as well as the cross disciplinary fields of gender and development studies.
Margaret Jolly is Professor and Convenor of the Gender Relations Project, Australian National University. Kalpana Ram is Research Fellow, Australian Research Council, Macquarie University.
or
Not Currently Available for Direct Purchase
Copyright © 2020 American Booksellers Association