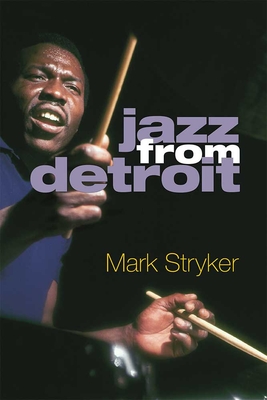 Jazz from Detroit explores the city’s pivotal role in shaping the course of modern and contemporary jazz. With more than two dozen in-depth profiles of remarkable Detroit-bred musicians, complemented by a generous selection of photographs, Mark Stryker makes Detroit jazz come alive as he draws out significant connections between the players, eras, styles, and Detroit’s distinctive history.

Stryker’s 21 years as an arts reporter and critic at the Detroit Free Press are evident in his vivid storytelling and insightful criticism. Jazz from Detroit will appeal to jazz aficionados, casual fans, and anyone interested in the vibrant and complex history of cultural life in Detroit.

Mark Stryker is an award-winning arts journalist and critic based in Detroit, Michigan, specializing in jazz, classical music, and visual art.


Praise For Jazz from Detroit…

“There is no other city like Detroit: the musicians, the vibe, the people. Thank you, Mark Stryker, for Jazz from Detroit.”
—Sonny Rollins

“No city has meant more to American musical culture than Detroit. In the bass register alone, Paul Chambers, Ron Carter, and James Jamerson provided the foundation for some of the greatest music of the 20th century, and we can continue to climb the entire frequency range to find the same deep and detailed descriptions of American life at its very best through the ideas and voices of iconic Detroit musicians. Deeply researched and expertly rendered, Mark Stryker’s Jazz from Detroit has provided a diligent and insightful window into every aspect of how Detroit came to be one of the major centers of modern American musical research. This is an important and highly entertaining document that will stand as a definitive testament to the musical culture of Detroit.”
—Pat Metheny

“With a smooth and deeply informed style Mark Stryker in Jazz from Detroit writes authoritatively about the city’s almost matchless contribution to the history of jazz. His profiles on some of the iconic figures in jazz are so insightfully drawn, so musical that you are tempted to stop reading and listen to their recordings.”
—Herb Boyd, author of Black Detroit: A People’s History of Self-Determination

“Jazz from Detroit is a masterpiece—one of the most insightful books about this music ever written. Mark Stryker’s perceptive commentary will resonate with both aficionados and newcomers to jazz.”
—Ethan Iverson