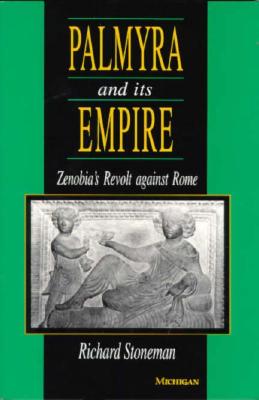 Palmyra and Its Empire (Paperback)

In the twilight of the third century C.E., the unity of the Western world was threatened by financial crisis, invasion, and plague. The Syrian city Palmyra had long protected Rome against Persian invasion, but under its queen Zenobia, Palmyra broke away from Roman hegemony. The Roman Empire had never been closer to disintegration, nor had it suffered so much before at the hands of a woman.
This volume is the first comprehensive historical treatment in any language of Roman Syria, the revolt of Zenobia, and the city of Palmyra. Drawing on discoveries in archaeology, the history of the Silk Road, numismatics, and Roman and Persian history, Richard Stoneman has assembled a rich collage of knowledge about this intriguing period. As he tells the story of this major revolt and its leader, the author surveys the history of the spice trade in antiquity, the religious ferment of third- century Syria, early modern travelers to Palmyra, and in particular Zenobia's changing image through the ages.
The lucid text and numerous illustrations will attract all who are intrigued by the third- century Roman Empire and its frontiers, by pre-Islamic Arab culture, by Roman Syria and Palmyra itself, and by the fascinating Queen Zenobia.
". . . an excellent synthesis of current knowledge and a sound introduction to the third cen-tury, especially in the East. . . ."--Journal of Military History
". . . Stoneman provides an excellent and readable introduction to what is known about Palmyra, and particularly the astonishing period in the mid-third century A.D. . . . [He] marshalls recent reinterpretations of the politics of the eastern frontier by both historians and archaeologists, as well as the inspiration of his own visits to Syria, to underline Palmyra's unique commercial position and the ability over the centuries of Roman rule of its ethnically and religiously highly heterogeneous ruling class to exploit the caravan trade from East and South Asia to their economic and political advantage."--Greece & Rome
Richard Stoneman has published numerous books on the ancient world and on travel in the Eastern Mediterranean. He is Senior Editor at Routledge.
or
Not Currently Available for Direct Purchase
Copyright © 2020 American Booksellers Association