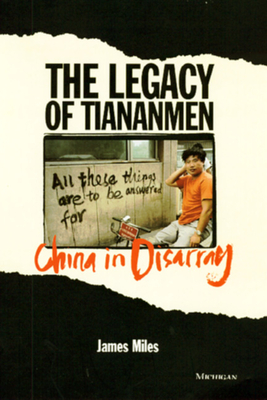 The Legacy of Tiananmen (Paperback)

In The Legacy of Tiananmen, James A. R. Miles asks whether senior leader Deng Xiaoping's gamble that prosperity would bring stability to China has worked or whether, instead, the country's economic transformation is fueling instability. The author, who was the BBC's Beijing correspondent from 1988 to 1994, argues that China today remains at least as unpredictable and volatile as it was at the outset of the Tiananmen Square protests.
On the basis of extensive interviews with officials, ordinary citizens, and intellectuals, the author concludes that China in the late 1990s is a country deeply unsure of its future. Politicians and public alike are asking themselves whether China is emerging as a new economic superpower with global influence to match, or if it is heading toward the chaos they so much fear. In the coming years, the answer to this question will have major implications for the outside world. With a population four times that of the former Soviet Union, a China in turmoil would have a colossal impact on some of the world's most successful economies.
About the Book:
"By brilliantly gathering together newspaper stories, street interviews, leaked official documents and Western chronicles, Miles creates a compelling story of economic change, internal political uncertainty and, following the dissolution of the Soviet Union, ideological isolation. . . . It's not a reassuring picture, but one that readers--and not just old China hands--should understand. This is an important book now and will be even more so any minute now." --Publishers Weekly
". . . a fascinating, sobering book that contrasts with much of the conventional wisdom on China. . . . [His] argument needs to be considered by all those who think about the future of the world's largest country and its potential impact on the rest of us." --Kenneth Lieberthal
"Miles's book is extremely lucid, coherent, and well-written. Its controversial main theme--that China is a country in deep trouble and may very well not survive a fractious succession struggle after Deng's death--is argued with persuasive force on many different societal levels." --Richard Baum, author of Burying Mao
or
Not Currently Available for Direct Purchase
Copyright © 2020 American Booksellers Association