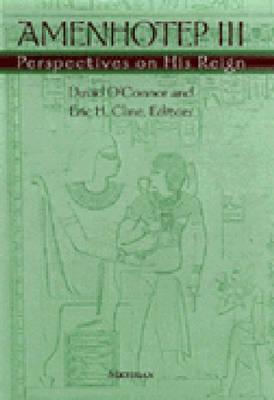 Perspectives on His Reign

Numerous volumes have been written on the heretic pharaoh Akhenaten, from Egypt's Eighteenth Dynasty. No less important a figure was Akhenaten's father, the pharaoh Amenhotep III, who reigned roughly 1391-1353 b.c.e. Among Amenhotep III's undertakings were his roles as leader of numerous campaigns in Syro-Palestine; builder of numerous temples, shrines, and buildings in Thebes and Memphis; and husband to Queen Tiyi and a bevy of lesser wives, including daughters of the kings of Babylon, Hatti and Mitanni. Amenhotep III above all encouraged foreign exploration and trade to regions far beyond the borders of Egypt. This study of Amenhotep III reveals a fascinating and complex individual, responsible in more than one way for the religious and political upheavals that occurred during the reign of his son, Akhenaten.
Amenhotep III: Perspectives on His Reign, edited by David O'Connor and Eric H. Cline consists of a series of essays on this complex individual and his reign. In addition to offering several provocative and ground-breaking essays, this volume serves as a compendium and sourcebook for hard-to-obtain details about the reign of Amenhotep III.
The volume begins with an overview of the pharaoh by Larry Berman: his life, his family, and the history of his reign. Betsy Bryan describes the historical antecedents of Amenhotep's reign. Ray Johnson deals first with the building activities of Amen-hotep III and then presents a study of his carved relief decoration, with particular emphasis on the tendencies towards "Atenism." Arielle Kozloff discusses a variety of small objects including cosmetic spoons, glass vessels, jewelry, and funerary equipment. David O'Connor discusses city planning, building functions, and aspects of religion in light of the contemporary Egyptian worldview. Bill Murnane's chapter on government is a fascinating glimpse of the system of government in place at the time. Extensive documentation is provided on the activities of Amenhotep in the Aegean and Anatolia, Mesopotamia, Nubia, and Syro-Palestine. The volume concludes with John Baines's chapter on the Amarna Age.
Amenhotep III: Perspectives on His Reign is a valuable contribution to pharaonic studies. It will be of interest to a wide range of scholars interested in Mediterranean literatures and cultures. It draws on literary, archaeological, and historical material to form an interdisciplinary study of a complex figure in pharaonic Egypt.
David O'Connor is Lila Acheson Wallace Professor of Ancient Egyptian Art, Institute of Fine Arts, New York University. Eric H. Cline is Assistant Professor of History, Xavier University.