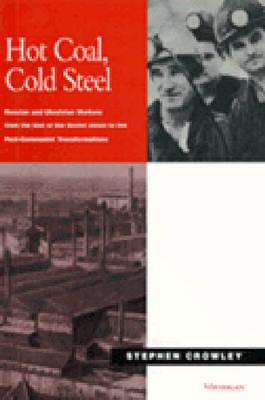 Well after the disintegration of the Communist Party and the Soviet state--and through several years of economic collapse--industrial workers in almost every sector of the former Soviet Union have remained quiescent and the same ineffective and unpopular trade unions still hold a virtual monopoly on worker's representation. Why? While many argue that labor is a central variable in the development of economic and political systems, little is known about workers in the states of the former Soviet Union since the fall of Communism. In a comparative study of two groups of industrial workers--the coal miners and steelworkers--at the end of the Soviet era, Stephen Crowley sheds light on where these workers have been and where they are going.
Coal miners in the final years of the Soviet Union effectively organized and led strikes which supported the end of Communism, even though their heavy subsidies would be threatened by capitalism. Steel workers, in contrast, did not effectively organize and strike. This pattern has continued under the new governments, with the coal miners effectively organized and seeking protection from the worst consequences of marketization, while the steel workers remain weakly organized despite deteriorating economic conditions.
Based on extensive on-site research including interviews with miners and steelworkers, labor leaders and plant managers, Crowley develops a detailed picture of the conditions under which workers organize. His findings have application beyond the conditions of post-Communist Russia and Ukraine to other societies undergoing fundamental change.
This book will be of interest to sociologists and political scientists interested in the role of labor in transitional societies, the patterns of organization of labor, as well as area specialists.
Stephen Crowley is Associate Professor of Political Science, Oberlin College.