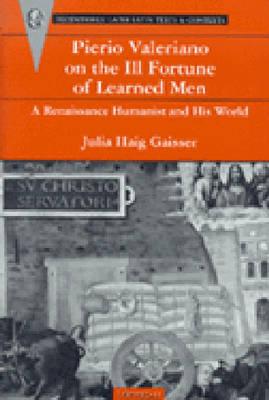 Pierio Valeriano on the Ill Fortune of Learned Men (Hardcover)

A Renaissance Humanist and His World (Recentiores: Later Latin Texts And Contexts)

Julia Haig Gaisser provides us with a highly readable translation of and context for the interesting and little known sixteenth-century dialogue, De Litteratorum Infelicitate (On the Ill-Fortune of Learned Men) by Pierio Valeriano. The dialogue between several humanists takes place during Lent, 1529, less than two years after the Sack of Rome and just before the stirrings of the Counter Reformation. These humanists, including Valeriano, are gathered together discussing the lives and unhappy fortunes of humanists from 1470 to 1540. The stories are interesting not only for the direct historical information they provide, but also because they are colored by the knowledge that the glory days of humanism have passed, and the speakers are memorializing a lost era.
This first English translation of Valeriano's work contains three sections: an introduction on Valeriano, Roman humanism, and the dialogue; the Latin text and facing English translation with historical notes; and biographies of the humanists involved. Gaisser's delightful book will satisfy all those interested in the world of the Roman humanist, for it elegantly provides a roster of major and minor figures, and the individual stories and characters are shown to be threads of a whole social and intellectual fabric.
Julia Haig Gaisser is Eugenia Chase Guild Professor in the Humanities and Professor of Latin, Bryn Mawr College.

Praise For Pierio Valeriano on the Ill Fortune of Learned Men: A Renaissance Humanist and His World (Recentiores: Later Latin Texts And Contexts)…

"In Gaisser's hands, a slight primary text has become the basis of a useful and most attractive edition, a book which deserves to be very widely read."
—John Considine, University of Alberta, Sixteenth Century Journal, Volume XXXII: No. 1 (2001)
— John Considine, University of Alberta
or
Not Currently Available for Direct Purchase
Copyright © 2020 American Booksellers Association