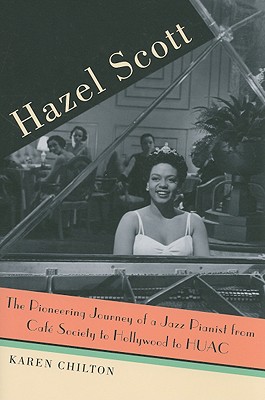 The Pioneering Journey of a Jazz Pianist, from Cafe Society to Hollywood to HUAC

Hazel Scott was an important figure in the later part of the Black renaissance onward. Even in an era where there was limited mainstream recognition of Black Stars, Hazel Scott's talent stood out and she is still fondly remembered by a large segment of the community. I am pleased to see her legend honored.
---Melvin Van Peebles, filmmaker and director

This book is really, really important. It comprises a lot of history---of culture, race, gender, and America. In many ways, Hazel's story is the story of the twentieth century.
---Murray Horwitz, NPR commentator and coauthor of Ain't Misbehavin'

Karen Chilton has deftly woven three narrative threads---Adam Clayton Powell, Jr., Harlem, and Hazel Scott---into a marvelous tapestry of black life, particularly from the Depression to the Civil Rights era. Of course, Hazel Scott's magnificent career is the brightest thread, and Chilton handles it with the same finesse and brilliance as her subject brought to the piano.
---Herb Boyd, author of Baldwin's Harlem: A Biography of James Baldwin

A wonderful book about an extraordinary woman: Hazel Scott was a glamorous, gifted musician and fierce freedom fighter. Thank you Karen Chilton for reintroducing her. May she never be forgotten.
---Farah Griffin, Institute for Research in African-American Studies, Columbia University

In this fascinating biography, Karen Chilton traces the brilliant arc of the gifted and audacious pianist Hazel Scott, from international stardom to ultimate obscurity.

A child prodigy, born in Trinidad and raised in Harlem in the 1920s, Scott's musical talent was cultivated by her musician mother, Alma Long Scott as well as several great jazz luminaries of the period, namely, Art Tatum, Fats Waller, Billie Holiday and Lester Young. Career success was swift for the young pianist---she auditioned at the prestigious Juilliard School when she was only eight years old, hosted her own radio show, and shared the bill at Roseland Ballroom with the Count Basie Orchestra at fifteen. After several stand-out performances on Broadway, it was the opening of New York's first integrated nightclub, Caf Society, that made Hazel Scott a star. Still a teenager, the Darling of Caf Society wowed audiences with her swing renditions of classical masterpieces by Chopin, Bach, and Rachmaninoff. By the time Hollywood came calling, Scott had achieved such stature that she could successfully challenge the studios' deplorable treatment of black actors. She would later become one of the first black women to host her own television show. During the 1940s and 50s, her sexy and vivacious presence captivated fans worldwide, while her marriage to the controversial black Congressman from Harlem, Adam Clayton Powell, Jr., kept her constantly in the headlines.

In a career spanning over four decades, Hazel Scott became known not only for her accomplishments on stage and screen, but for her outspoken advocacy of civil rights and her refusal to play before segregated audiences. Her relentless crusade on behalf of African Americans, women, and artists made her the target of the House Un-American Activities Committee (HUAC) during the McCarthy Era, eventually forcing her to join the black expatriate community in Paris. By age twenty-five, Hazel Scott was an international star. Before reaching thirty-five, however, she considered herself a failure. Plagued by insecurity and depression, she twice tried to take her own life. Though she was once one of the most sought-after talents in show business, Scott would return to America, after years of living abroad, to a music world that no longer valued what she had to offer. In this first biography of an important but overlooked African American pianist, singer, actor and activist, Hazel Scott's contributions are finally recognized.

Karen Chilton is a New York-based writer and actor, and the coauthor of I Wish You Love, the memoir of legendary jazz vocalist Gloria Lynne.


Praise For Hazel Scott: The Pioneering Journey of a Jazz Pianist, from Cafe Society to Hollywood to HUAC…

"Karen Chilton's highly anticipated Hazel Scott is both elegant and eloquent." --Wil Haygood, author of King of the Cats: The Life and Times of Adam Clayton Powell, Jr.

“[A] compact and engaging book . . . succinct and lucid. . . . Perhaps the highest compliment one can pay to this fine biography is that during the first 150 pages the reader is wondering why Scott isn’t better known, at least in the jazz world. But by the story’s end . . . the same reader knows exactly why, but is still likely to be singing her praises as a true trailblazer in African-American culture.”
—JazzTimes

"[A] compact and engaging book . . . succinct and lucid. . . . Perhaps the highest compliment one can pay to this fine biography is that during the first 150 pages the reader is wondering why Scott isn’t better known, at least in the jazz world. But by the story's end . . . the same reader knows exactly why, but is still likely to be singing her praises as a true trailblazer in African-American culture."
—JazzTimes