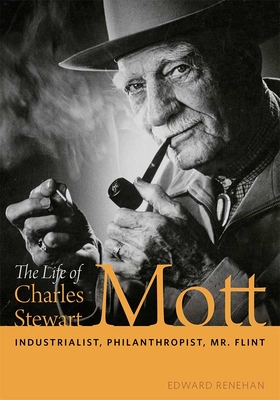 The name Charles Stewart Mott is today most widely recognizable when used in connection with the word Foundation . Established by the General Motors mogul in 1926, the Charles Stewart Mott Foundation has made grants in excess of $3 billion over the past nine decades, both in Mott’s adopted hometown of Flint, Michigan, and around the world. But philanthropy is only one reason the life of Mott—entrepreneur, industrialist, banker, mayor, and sometimes even cowboy—is worth knowing about today.

Mott was born ten years after the death of Abraham Lincoln and one year before the 1876 centennial of the founding of the United States. He not only lived through the most dramatic technological shift and period of economic growth that had yet been known, but he actively participated in and contributed to these events as a major innovator and leader at General Motors, as a public official, and as a philanthropist who in many ways reinvented the nonprofit model. Known widely as Mr. Flint, Mott was elected three times as the city’s mayor and played a central role in modernizing and expanding its infrastructure and institutions. In office, Mott helped transform Flint from a town capable of efficiently accommodating a population of roughly thirteen thousand in the first decade of the twentieth century to a modern metropolis capable of hosting an industrial middle class of more than one hundred thousand.

This vivid biography portrays a complex, brilliant, often contradictory, and ultimately fascinating man. His life—both as a record of himself and as a reflection of his times—makes for a good and important story that will be enjoyed by readers interested in Michigan history and politics, the automotive industry, and global philanthropy.

Edward Renehan is author of over 20 books, including Dark Genius of Wall Street: The Misunderstood Life of Jay Gould, King of the Robber Barons and The Lion's Pride: Theodore Roosevelt and His Family in Peace and War.