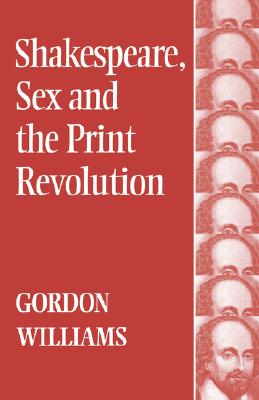 Shakespeare, Sex and the Print Revolution

This book investigates how the sexual element in Shakespeare's works in complicated and compromised by the impact of print. Whether the issue is one of censorship and evasion or sexual redefinition, the fact that Shakespeare wrote in the first century of popular print is crucial. Out of the newly-accesible classical canon he creates a reconstituted idea pf the sexual temptress; and out of Counter-Reformation propaganda he fashions his own complex thinking about the prostitute. Shakespeare's theatrical scripts, meeting-ground for the spoken and written word, contribute powerfully to those socio-sexual debates which had been re-energised by print. Dr Williams teaches at the University of Wales, Lampeter. His previous book was A Dictionary of Sexual Language and Imagery in Shakespearean and Stuart Literature (Athlone, 1994) and forthcoming is a Glossary of Shakespeare's Sexual Usage (Athlone, 1997).

Gordon Williams is Reader in English at the University of Wales, Lampeter. Previous books include A Dictionary of Sexual Language and Imagery in Shakespearean and Stuart Literature (3 vols, Athlone, 1994) and Shakespeare, Sex and the Print Revolution (Athlone, 1996).
Loading...
or support indie stores by buying on