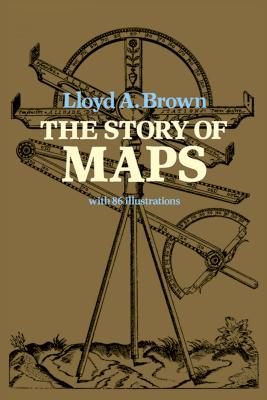 The Story of Maps (Paperback)

By Lloyd A. Brown

"An important and scholarly work; bringing together much information available heretofore only in scattered sources ... easily readable." -- Gerald I. Alexander, F.R.G.S. Cartographer, Map Division, New York Public Library
Early map making was characterized by secrecy. Maps were precious documents, drawn by astrologers and travelers, worn out through use or purposely destroyed. Just as men first mapped the earth indirectly, via the sun and stars, so must the history of maps be approached circuitously, through chronicles, astronomy, Strabo and Ptolemy, seamanship, commerce, politics. From the first determination of latitude 2000 years ago through the dramatic unraveling of longitude 1700 years later, the story of maps plots the course of civilization. This book charts the course with a breadth and depth still unsurpassed in a scholarly survey.
Lloyd A. Brown's cartographic erudition came through his years as librarian of the Peabody Institute, Baltimore, and as curator of maps at the Clements Library, University of Michigan, where he devised a system for classifying and cataloging some 25,000 old maps. He researched The Story of Maps over four years, seeking out as many pertinent sources as possible for a definitive history and summation of map lore.
The Story of Maps follows the peaks and declines of western societies, with marine and topographic knowledge flourishing secretly with the sea powers of Minoan Crete and the Phoenicians, surfacing again with Hipparchus, Eratosthenes, Strabo, and Ptolemy, then waning until the Crusades brought travel and trade back to prominence. The Genoese, Venetians, Portuguese, Dutch, Spanish, and English all had their years of hegemony, great navigators and charts, aided by the mapping ideas of Mercator and Edward Wright. The most brilliant minds of the era, including Galileo and Newton, attempted to solve the problem of longitude at sea; the solution came from a Yorkshire clockmaker named John Harrison, who won a 20,000 pound prize for his pains.
The Story of Maps celebrates cartography from Strabo to World War II. Eighty-six remarkable illustrations, including early maps, prints and portraits, many unique and seen only in museums, supplement the texts. The exhaustive bibliography matches the text in span and usefulness for those who will undoubtedly be stimulated by this book to read more regarding maps.