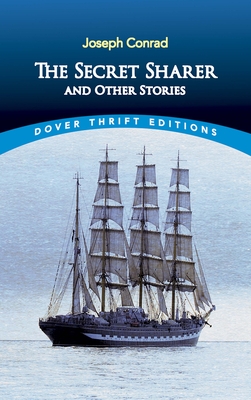 The Secret Sharer and Other Stories (Dover Thrift Editions)

Joseph Conrad (1857-1924) spent much of his life at sea, and his experiences as a mariner deeply influenced his fiction. He set many of his finest stories aboard ship, where his characters -- closely confined, enduring the rigors of the sea -- might struggle more intensely with the psychological and moral issues that engaged him. This volume contains three of Conrad's most powerful stories in this genre: "Youth: A Narrative" (1898), "Typhoon" (1902) and "The Secret Sharer" (1910).
In each of these exciting tales, Conrad's celebrated prose style, rich in the cadences of the sea, draws readers into a story that probes deeply, often suspensefully, into the mysteries of human character. Here are adventures of the sea and of the soul, related by a novelist considered one of the greatest writers in the language, reprinted from authoritative editions.

Joseph Conrad (1857-1924) was fluent from birth in French as well as his native Polish. He learned his third language, English, as an adult, and it was in English that he wrote his evocative stories and novels. Conrad drew upon his experiences in the British and French navies to portray the struggles of humanity amid the world's vast indifference.
Loading...
or support indie stores by buying on