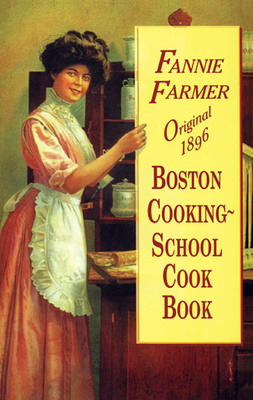 Considered the "greatest American cookbook," Fannie Merritt Farmer's Boston Cooking-School Cook Book, published over a century ago, was acclaimed for a number of innovations. It was the first to use terms now considered standard in American cooking (e.g., a level cupful, teaspoonful, and tablespoonful); it relied on simple directions and showed a hitherto neglected concern for nutrition. Novices as well as practiced cooks of the period were treated to a vast amount of information that left nothing to the user's imagination -- from instructions for building a fire to how to bone a bird.
This is an unabridged republication of the 1896 edition, complete with original illustrations and product advertisements. Today's cooks will find step-by-step instructions for preparing an enormous array of dishes, including such early American fare as fried corn meal mush, baked cod with oyster stuffing, and tipsy pudding; adaptations of continental cuisine -- quenelles and loin of veal la jardin re -- as well as hundreds of recipes for beverages, breads, pastries, meat, vegetable and poultry dishes, soups, salads, hot and cold desserts, and much more.
A fascinating record of how people cooked in the late nineteenth century, this authentic facsimile of the first Fannie Farmer cookbook will delight lovers of nostalgia. For homemakers, it remains "the ultimate American cookbook classic ... as useful today as it was 100 years ago." -- Jacques Pepin, author and host of PBS-TV's Today's Gourmet.