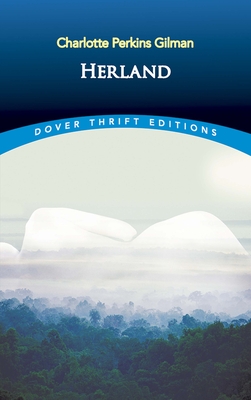 A prominent turn-of-the-century social critic and lecturer, Charlotte Perkins Gilman is perhaps best known for her short story "The Yellow Wallpaper," a chilling study of a woman's descent into insanity, and Women and Economics, a classic of feminist theory that analyzes the destructive effects of women's economic reliance on men.
In Herland, a vision of a feminist utopia, Gilman employs humor to engaging effect in a story about three male explorers who stumble upon an all-female society isolated somewhere in South America. Noting the advanced state of the civilization they've encountered, the visitors set out to find some males, assuming that since the country is so civilized, "there must be men." A delightful fantasy, the story enables Gilman to articulate her then-unconventional views of male-female roles and capabilities, motherhood, individuality, privacy, the sense of community, sexuality, and many other topics.
Decades ahead of her time in evolving a humanistic, feminist perspective, Gilman has been rediscovered and warmly embraced by contemporary feminists. An articulate voice for both women and men oppressed by the social order of the day, she adeptly made her points with a wittiness often missing from polemical writings. This inexpensive edition of Herland will charm readers with the tale's mischievous, ironic outlook.