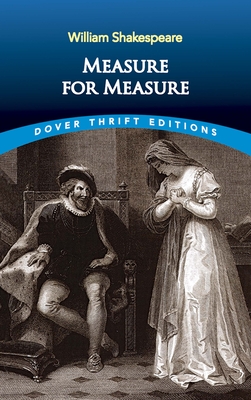 One of Shakespeare's dark comedies, Measure for Measure is as noteworthy for its fascinating political and social implications as for its compelling characters: a duke masquerading as a monk, a would-be nun ordered to sacrifice her chastity to save her brother's life, and a self-righteous courtier, professing his incorruptibility while concealing a depraved private life.
In this engrossing drama set in 16th-century Vienna, Duke Vincentio attempts to enforce the city's long-ignored morality laws, which results in a death sentence for Claudio, a young man accused of seducing and impregnating his fianc e. Isabella, his sister, attempts to gain a pardon for him, but refuses when she is asked to exchange her virtue for her brother's life.
Claudio eventually is freed and utter tragedy is averted, as Shakespeare explores with force and sensitivity the basis of good government, public and private morality, and the balancing of justice and mercy, among other themes.

He was not of an age, but for all time, declared Ben Jonson of his contemporary William Shakespeare (1564-1616). Jonson's praise is especially prescient, since at the turn of the 17th century Shakespeare was but one of many popular London playwrights and none of his dramas were printed in his lifetime. The reason so many of his works survive is because two of his actor friends, with the assistance of Jonson, assembled and published the First Folio edition of 1623.
Loading...
or
Not Currently Available for Direct Purchase