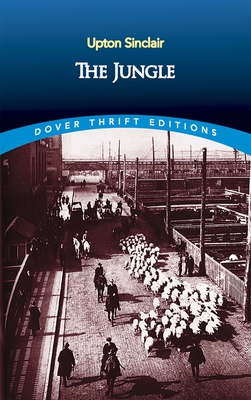 An ardent activist, champion of political reform, novelist, and progressive journalist, Upton Sinclair is perhaps best known today for The Jungle -- his devastating expos of the meat-packing industry. A protest novel he privately published in 1906, the book was a shocking revelation of intolerable labor practices and unsanitary working conditions in the Chicago stockyards. It quickly became a bestseller, arousing public sentiment and resulting in such federal legislation as the Pure Food and Drug Act.-The brutally grim story of a Slavic family who emigrates to America, The Jungle tells of their rapid and inexorable descent into numbing poverty, moral degradation, and social and economic despair. Vulnerable and isolated, the family of Jurgis Rudkus struggles -- unsuccessfully -- to survive in an urban jungle.
A powerful view of turn-of-the-century poverty, graft, and corruption, this fiercely realistic American classic is still required reading in many history and literature classes. It will continue to haunt readers long after they've finished the last page.

Upton Sinclair was a prolific author, committed socialist, and political activist who gained enormous popularity when his 1906 novel The Jungle exposed conditions in the U.S. meat-packing industry. In 1943, he earned a Pulitzer Prize for his series tale, Dragon's Teeth.
Loading...
or support indie stores by buying on