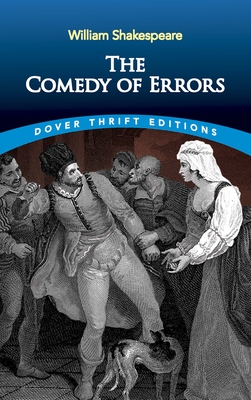 The Comedy of Errors

Two sets of twins are separated at birth by a storm at sea: a pair of masters (both named Antipholus) and a pair of servants (both named Dromio). Years later, the Antipholus-and- Dromio pair raised in Syracuse happen to visit Ephesus, where the respective twins reside -- providing the basis for ongoing incidents of mistaken identity, within a lively plot of quarrels, arrests, and a grand courtroom denouement.
Based on a pair of comic dramas from ancient Rome, The Comedy of Errors presents a spectacle of pure farce in the spirit of utmost fun and -- as the title suggests -- hilarious confusion. One of Shakespeare's earliest dramatic efforts, the play abounds in his trademark conceits, puns, and other forms of fanciful wordplay. It also foreshadows his later and greatest comedies, offering students and scholars a valuable key to the playwright's development.

He was not of an age, but for all time, declared Ben Jonson of his contemporary William Shakespeare (1564-1616). Jonson's praise is especially prescient, since at the turn of the 17th century Shakespeare was but one of many popular London playwrights and none of his dramas were printed in his lifetime. The reason so many of his works survive is because two of his actor friends, with the assistance of Jonson, assembled and published the First Folio edition of 1623.
Loading...
or support indie stores by buying on