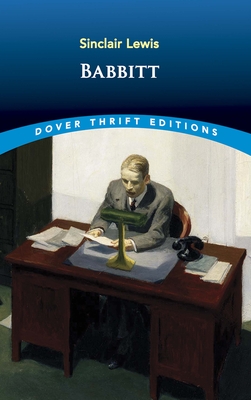 Prosperous and socially prominent, George Babbitt appears to have everything a man could wish: good health, a fine family, and a profitable business in a booming Midwestern city. But the middle-aged real estate agent is shaken from his self-satisfaction by a growing restlessness with the limitations of his life. When a personal crisis forces a reexamination of his values, Babbitt mounts a rebellion against social expectations -- jeopardizing his reputation and business standing as well as his marriage.
Widely considered Sinclair Lewis's greatest novel, this satire of the American social landscape created a sensation upon its 1922 publication. Babbitt's name became an instant and enduring synonym for middle-class complacency, and the strictures of his existence revealed the emptiness of the mainstream vision of success. His story reflects the nature of a conformist society, in which the pressures of maintaining propriety can ultimately cause individuals to lose their place in the world.
Babbitt ranks among the important 20th-century works addressing the struggles of people caught in the machinery of modern life, and it remains ever-relevant as a cautionary tale against clinging to conventional values.