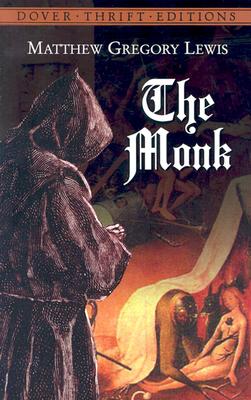 Supernatural events, women in distress, and a corrupt clergy were popular themes in the Gothic novels of the 19th century. All of those elements, along with murder, incest, and the excesses of the Spanish Inquisition, are present in The Monk (1796), one of the era's bestselling and most influential novels.
Set in a sinister Capuchin monastery in Madrid, the ever-more horrifying narrative recounts the experiences of a lustful and devious abbot, who forgoes his monastic vows in the face of temptation and sexual obsession. Seduced by an evil woman and intoxicated by desire, he assaults an innocent young girl and -- to conceal his guilt -- murders her mother. For these and other unholy offenses, he is apprehended and imprisoned, where he is subject to unpleasant treatment at the hands of the ecclesiastical authorities. In order to escape, he sells his soul to the devil, discovering in the aftermath the grim consequence of his horrifying acts.
The most famous work in the otherwise unremarkable literary production of "Monk" Lewis, the novel's anticlericalism and heavy-breathing eroticism earned it a scandalous reputation in its time that was still intact 100 years after its publication. Today, more than two centuries later, the unvarnished crime and passion of The Monk still retain the ability to jar readers -- even those inured to the violence and degradation of modern life. A masterpiece of Gothic storytelling, the book remains, as Samuel Taylor Coleridge noted, "rich, powerful, and fervid."