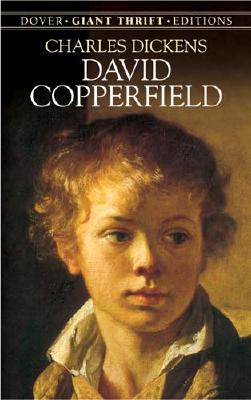 "Like many fond parents, I have in my heart of hearts a favourite child," confessed Charles Dickens in the preface of this novel, "and his name is David Copperfield." Millions of readers have taken young David into their hearts as well, weeping over his misfortunes and exulting in his triumphs. Dickens' seventh novel, David Copperfield, appeared in 1850, by which time he was a British national institution. Based on the author's own tumultuous journey from boy to man, this epic traces David's progress from his mother's sheltering arms to the miseries of boarding-school and sweatshop, and the rewards of friendship, romance, and self-discovery in his vocation as a writer.
In addition to its compelling narrative, the great appeal of David Copperfield lies in its memorable cast of characters. From Mr. Murdstone, the brutal stepfather, to the scheming clerk Uriah Heep, the novel is peopled by vividly observed characters. Nursemaid Peggoty, bursting with vitality, leaves a trail of flying buttons in her wake. Grandiloquent Mr. Micawber is ever-confident that something will turn up to save his large brood from penury. Kind by wildly eccentric, Aunt Betsey Trotwood accepts counsel from the wise fool, Mr. Dick, and provides a heated reception for trespassing donkeys. Dickens' genius was comic, and David Copperfield reflects his view of existence as a mixture of laughter and tears -- with laughter uppermost.

After a childhood blighted by poverty, commercial success came early to Charles Dickens (1812-70). By the age of 24, he was an international sensation whose new novels were eagerly anticipated. Two centuries later, Dickens' popularity endures as readers revel in the warm humanity and rollicking humor of his tales of self-discovery.
Loading...
or
Not Currently Available for Direct Purchase