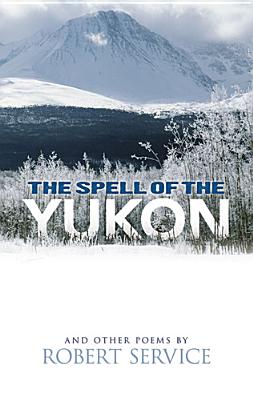 The Spell of the Yukon and Other Poems

There are strange things done in the midnight sun, declared Robert Service as he related the fulfillment of a dying prospector's request. The Cremation of Sam McGee was based on one of many peculiar tales he heard upon his 1904 arrival in the Canadian frontier town of Whitehorse. Less than a decade after the Klondike gold rush, many natives and transplants remained to tell stories of the boom towns that sprang up with the sudden influx of miners, gamblers, barflies, and other fortune-seekers. Service's compelling verses -- populated by One-Eyed Mike, Dangerous Dan McGrew, and other colorful characters -- recapture the era's venturesome spirit and vitality.
In this, his best-remembered work, the common man's poet and Canadian Kipling presents thirty-four verses that celebrate the rugged natural beauty of the frozen North and the warm humanity of its denizens. Verses include The Shooting of Dan McGrew (A bunch of the boys were whooping it up in the Malamute saloon), The Heart of the Sourdough (There where the mighty mountains bare their fangs unto the moon), and The Call of the Wild (Have you gazed on naked grandeur where there's nothing else to gaze on). Generations have fallen under the spell of these poems, which continue to enchant readers of all ages.

Known as the Canadian Kipling, Robert Service (1877-1958) is also frequently compared to Jack London because of their shared admiration for the Yukon wilderness. Service's poetry -- including The Shooting of Dan McGrew and The Cremation of Sam McGee -- achieved immediate and lasting worldwide fame.
Loading...
or support indie stores by buying on