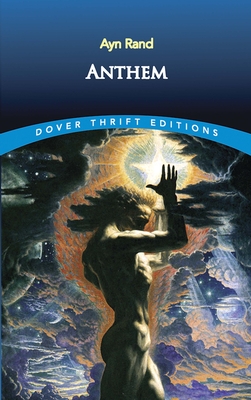 Hailed by The New York Times as "a compelling dystopian look at paranoia from one of the most unique and perceptive writers of our time," this brief, captivating novel offers a cautionary tale. The story unfolds within a society in which all traces of individualism have been eliminated from every aspect of life -- use of the word "I" is a capital offense. The hero, a rebel who discovers that man's greatest moral duty is the pursuit of his own happiness, embodies the values the author embraced in her personal philosophy of objectivism: reason, ethics, volition, and individualism.
Anthem anticipates the themes Ayn Rand explored in her later masterpieces, The Fountainhead and Atlas Shrugged. Publisher's Weekly acclaimed it as "a diamond in the rough, often dwarfed by the superstar company it keeps with the author's more popular work, but every bit as gripping, daring, and powerful."

Ayn Rand (1905-82) was among the 20th century's most popular and controversial political thinkers, and she retains a huge following 30 years after her death. Her most famous books are The Fountainhead and Atlas Shrugged.
Loading...
or support indie stores by buying on