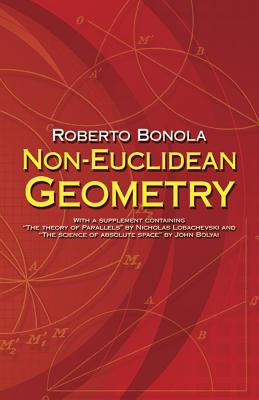 This is an excellent historical and mathematical view by a renowned Italian geometer of the geometries that have risen from a rejection of Euclid's parallel postulate. Students, teachers and mathematicians will find here a ready reference source and guide to a field that has now become overwhelmingly important.
Non-Euclidean Geometry first examines the various attempts to prove Euclid's parallel postulate-by the Greeks, Arabs, and mathematicians of the Renaissance. Then, ranging through the 17th, 18th and 19th centuries, it considers the forerunners and founders of non-Euclidean geometry, such as Saccheri, Lambert, Legendre, W. Bolyai, Gauss, Schweikart, Taurinus, J. Bolyai and Lobachevski. In a discussion of later developments, the author treats the work of Riemann, Helmholtz and Lie; the impossibility of proving Euclid's postulate, and similar topics. The complete text of two of the founding monographs is appended to Bonola's study: The Science of Absolute Space by John Bolyai and Geometrical Researches on the Theory of Parallels by Nicholas Lobachevski. Firmly recommended to any scientific reader with some mathematical inclination -- Journal of the Royal Naval Scientific Service. Classic on the subject. -- Scientific American.