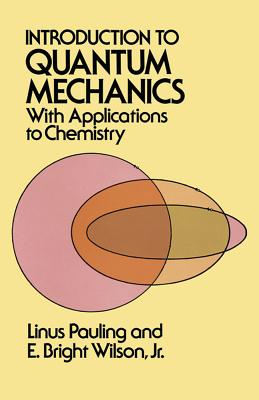 When this classic text was first published in 1935, it fulfilled the goal of its authors "to produce a textbook of practical quantum mechanics for the chemist, the experimental physicist, and the beginning student of theoretical physics." Although many who are teachers today once worked with the book as students, the text is still as valuable for the same undergraduate audience.
Two-time Nobel Prize winner Linus Pauling, Research Professor at the Linus Pauling Institute of Science and Medicine, Palo Alto, California, and E. Bright Wilson, Jr., Professor Emeritus of Chemistry at Harvard University, provide a readily understandable study of "wave mechanics," discussing the Schrodinger wave equation and the problems which can be solved with it. Extensive knowledge of mathematics is not required, although the student must have a grasp of elementary mathematics through the calculus. Pauling and Wilson begin with a survey of classical mechanics, including Newton's equations of motion in the Lagrangian form, and then move on to the "old" quantum theory, developed through the work of Planck, Einstein and Bohr. This analysis leads to the heart of the book ― an explanation of quantum mechanics which, as Schrodinger formulated it, "involves the renunciation of the hope of describing in exact detail the behavior of a system." Physics had created a new realm in which classical, Newtonian certainties were replaced by probabilities ― a change which Heisenberg's uncertainty principle (described in this book) subsequently reinforced.
With clarity and precision, the authors guide the student from topic to topic, covering such subjects as the wave functions for the hydrogen atom, perturbation theory, the Pauli exclusion principle, the structure of simple and complex molecules, Van der Waals forces, and systems in thermodynamic equilibrium. To insure that the student can follow the mathematical derivations, Pauling and Wilson avoid the "temptation to condense the various discussions into shorter and perhaps more elegant forms" appropriate for a more advanced audience. Introduction to Quantum Mechanics is a perfect vehicle for demonstrating the practical application of quantum mechanics to a broad spectrum of chemical and physical problems.

Linus Pauling: Two-Time Nobel Laureate In 1985 Dover reprinted Introduction to Quantum Mechanics with Applications to Chemistry, a well-known older book by Linus Pauling and E. Bright Wilson. This book had been first published fifty years earlier and remarkably still found readers in 1985, and still does today, twenty-five years further on. The first edition of Pauling's General Chemistry was a short book of lessr than 250 pages published in 1944, during World War II. Three years later, it had more than doubled in size to almost 600 pages, and the 1953 edition was over 700 pages. Fifteen years later, for the 1970 edition, it reached its final size and configuration at almost 1,000 pages ― and that is the edition which Dover reprinted in 1988. Dr. Pauling's one request at that time was that we keep the price affordable for students. Linus Pauling is of course the only Dover author to win two Nobel prizes, for Chemistry in 1954 and for Peace in 1962; he is the only winner in history of two unshared Nobel Prizes. In the Author's Own Words: "Satisfaction of one's curiosity is one of the greatest sources of happiness in life." "Do unto others 20% better than you would expect them to do unto you, to correct for subjective error." "The way to get good ideas is to get lots of ideas, and throw the bad ones away." "Facts are the air of scientists. Without them you can never fly." -- Linus Pauling Critical Acclaim for General Chemistry "An excellent text, highly recommended." -- Choice
Loading...
or
Not Currently Available for Direct Purchase