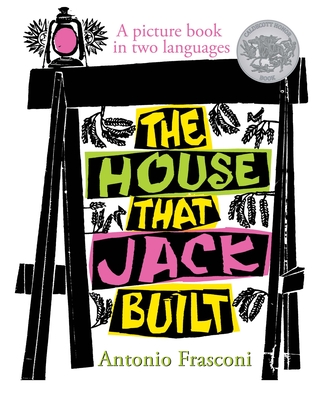 The House That Jack Built

A Picture Book in Two Languages

Generations of children have delighted in the nursery rhyme about Jack and his house. Starting with the familiar refrain "This is the house that Jack built. This is the malt that lay in the house that Jack built, " the age-old chant expands to include the maiden all forlorn, the cow with the crumpled horn, and other distinctive characters.
This Caldecott Honor-winning picture book offers an additional attraction to the traditional tale: all of the verses appear in French as well as English. From the opening, "Voici la maison que Jacques a b tie. Voici le malt que se trouvait dans la maison que Jacques a b tie, " to the grand conclusion, the repetition of catchy rhymes provides effortless reinforcement of French words and phrases. Brilliantly colored woodcut illustrations by renowned artist Antonio Frasconi add an ageless beauty to this keepsake edition.

Antonio Frasconi (1919-2013) was an artist of international fame whose work is represented in leading art museums around the world. The Uruguayan-American artist was raised in a bilingual setting, which fostered his belief that children should be made aware of other languages early in life and which led to his use of multiple languages in his award-winning picture books.
Loading...
or support indie stores by buying on