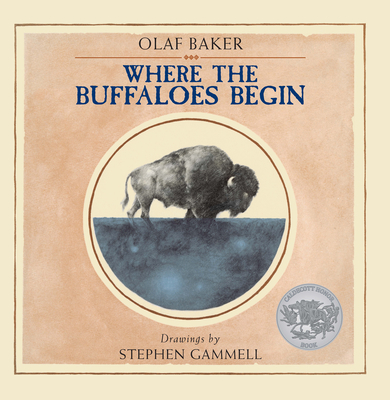 Where the Buffaloes Begin

Over the blazing campfires, where the wind moaned eerily through the thickets of juniper and fir, they spoke of it in the Indian tongue--the strange lake to the southward whose waters never rest. And Nawa, the medicine man, who had lived such countless moons that not even the oldest member of his people could remember a time when Nawa was not old, declared that, if only you arrived at the right time, on the right night, you would see the buffaloes rise out of the middle of the lake and come crowding to the shore; for there, he said, was the sacred spot where the buffaloes began.
Ten-year-old Little Wolf, an imaginative and courageous boy, is determined to observe this spectacle, and his quest leads not only to a miraculous vision but also to the salvation of his tribe. This Caldecott Honor picture book and National Book Award nominee was hailed by Booklist as an eminent picture book and, incidentally, one that proves that black and white can move as forcefully as color. The New York Times praised artist Stephen Gammell for his spectacular scenes of tumbling clouds, of earth churned by flying hoofs, of teepees in the early dawn. But most of all he conveys the hulking, surging, rampaging strength of the shaggy buffaloes as they rise out of a shadowy mist, the mist of legend or dream.

Born in England in the 1870s, Olaf Baker moved to the United States in 1902 and traveled for many years throughout the West, chiefly in the territory of the Blackfoot Indians. Inspired by the wilderness, he wrote a series of popular novels, including Shasta of the Wolves, Thunder Boy, and Dusty Star. Stephen Gammell has illustrated nearly sixty children's books since his first, A Nutty Business by Ida Chittum, in 1973. He has won the Caldecott Medal (for Song and Dance Man by Karen Ackerman) and has been awarded a Caldecott Honor (for Where the Buffaloes Begin by Olaf Baker). Gammell is particularly well known for the surreal, unsettling illustrations he provided for Scary Stories to Tell in the Dark, a series of short horror stories by Alvin Schwartz. He and his wife, photographer Linda Gammell, live in St. Paul, Minnesota.
Loading...
or support indie stores by buying on