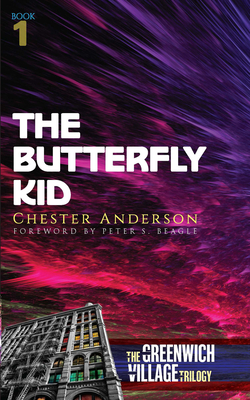 The Greenwich Village Trilogy Book One

One of the more trippy, but very interesting novels among New Wave sci-fi books. -- Futurism.com There's always a fresh new face in Greenwich Village, but this one belongs to someone special -- a dude who can create living butterflies out of nothing. The Butterfly Kid shows up at exactly the same time as a powerful new drug: Reality Pills, which transform fantasies into physical reality. Chester Anderson and his circle of pot-smoking poets and musicians are eager to investigate this mind-bending narcotic until they realize it's being distributed by lobster-shaped giants from outer space. Now Chester and a gaggle of heads and hipsters are all that stand between the planet's freedom and its enslavement by aliens.
Nominated for a 1968 Hugo Award, The Butterfly Kid is a prime example of science fiction's New Wave Movement, a stylistically experimental trend of the 1960s and 1970s. This comically surrealistic tale is the first installment of the Greenwich Village Trilogy, a shared-world scenario written by three different authors, all of whom appear in the books as characters. Dover Publications returns this volume to print for the first time in nearly 40 years, along with its sequels, The Unicorn Girl and The Probability Pad. This edition features a new Foreword by Peter S. Beagle, author of the fantasy classic The Last Unicorn.

Poet, author, and musician Chester Anderson (1932-91) was a member of the Beat Generation and an editor of underground journals in New York and San Francisco. His novel The Butterfly Kid was nominated for a Hugo Award in 1968 and is a prime example of science fiction's New Wave Movement, a stylistically experimental trend of the 60s and 70s.
Loading...
or
Not Currently Available for Direct Purchase