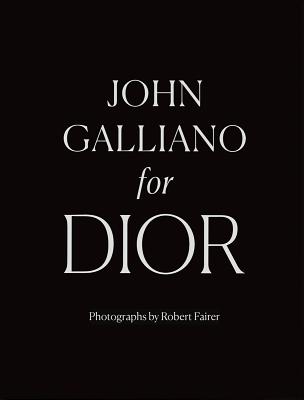 John Galliano’s creations for the House of Dior have entered fashion history and are widely recognized as some of the most breathtaking and imaginative collections ever created. John Galliano for Dior is dedicated to showcasing these unforgettable designs, which have become collectors’ items and formed a key chapter in the history of the House of Dior—“the greatest house in the world,” as Galliano stated when he was first placed at its helm. “I see myself as a guardian of [Christian Dior’s] spirit, a keeper of his dreams.” Opening with an essay on the designer’s work, the book unfolds chronologically, covering a decade of showstopping designs, from 1998 to 2010, and revealing previously unseen behind-the-scenes moments that capture models, hairdressers, stylists, makeup artists, and John Galliano himself at their most creative.


Praise For John Galliano for Dior…

Features…backstage shots and detailed close-ups…. Dramatic and colorful, Mr. Galliano’s more-is-more aesthetic is captured by the photographer Robert Fairer, who documented the designer’s collections for over a decade.
— The New York Times

For the first time,
the history of Galliano's Dior is being celebrated in full... Reveal[s] the drama,
behind-the-scenes moments, glamour and genius of one of the most revered
designers of our time.
— The Face

Fairer's images
accurately capture the heady backstage drama, superlative mannequins of the era
and most of all Galliano's creations in finest detail. Essential for fans of
the house of Dior's arguably most exuberant period.
— Glass

Captures the
designer's extraordinary creations during his tenure at the French fashion
house in previous unseen behind-the-scenes moments.
— Business of Fashion

A must-own for any
fashion connoisseur.
— Society Texas Magazine

Fairer's backstage
photos capture not only the designer's uninhibited creations, but also the
behind-the-scenes frenzy at his shows... stunning.
— Daily Mail

Robert Fairer worked exclusively for American Vogue behind the scenes for over a decade. Beginning his career at British Elle in the mid 1990s, then Harpers Bazaar USA and finally at American Vogue, he covered the fashion zeitgeist of supermodel, designer and fashion excess from 1993-2011.His backstage archive has been published in three monographs, Alexander McQueen Unseen, John Galliano Unseen, and Marc Jacobs Unseen. Robert’s work is published in the New York Times, Vogue, Harpers Bazaar, i-D Magazine, and Visionaire, as well as fashion, portrait and lifestyle books, and anthologies. Robert continues to document the fashionable elite and collaborate with his editors and clients in uncharted fashion domains.

Oriole Cullen is a Curator of Fashion at the V&A.
Loading...
or support indie stores by buying on