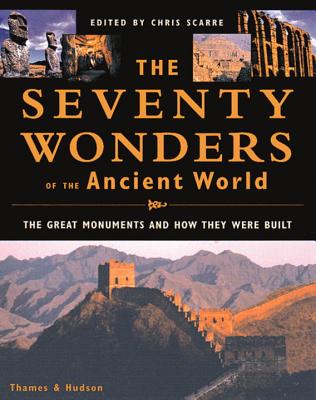 The Seventy Wonders of the Ancient World (Hardcover)

The Great Monuments and How They Were Built

Abu Simbel, Angkor Wat, Petra: today we stand in awe before the great monuments of the past as we wonder who built them and for what purpose. This authoritative and profusely illustrated compendium celebrates the achievements of those ancient builders who created huge and impressive structures without the benefit of modern technology. Expanding upon the theme of the traditional Seven Wonders, The Seventy Wonders of the Ancient World incorporates marvels from around the globe, spanning the centuries from the first stone monuments of the fifth millennium b.c. to the Great Temple of the Aztecs in the sixteenth century a.d. The shaping of the Great Sphinx at Giza, the raising of the stones at Stonehenge, the laying out of the Nazca Lines on the face of the Peruvian desert, or the construction of the Great Wall of China (probably the greatest building project ever attempted in ancient times) are all described and explained in light of the most up-to-date archaeological research. So too are the erection of Egyptian obelisks and Easter Island statues, and the building of Roman roads and Inca bridges. Neglected monuments such as the giant stelae of Aksum or the mountain palace at Sigiriya are set beside the great Baths of Caracalla in Rome and the palace of Persepolis. Packed with factfiles, diagrams, photographs, and newly commissioned perspective views, The Seventy Wonders of the Ancient World provides a testament to the skill of the ancient engineers and architects who created lasting memorials--some for practical ends, others for prestige and propaganda--that have continued to impress successive generations through the ages.

Chris Scarre is Professor of Archaeology at Durham University. He is a specialist in European prehistory, but has broad interests in the archaeology of other regions of the world. He is the author of many books and has directed excavations at prehistoric sites in France, Portugal, and the Channel Islands. He has recently taken over as editor of the leading UK archaeology journal Antiquity.
or support indie stores by buying on
Copyright © 2020 American Booksellers Association