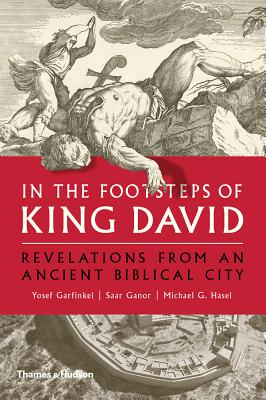 In the Footsteps of King David (Hardcover)

Revelations from an Ancient Biblical City

The remarkable excavation of a previously unidentified city in Israel from the time of King David, shedding new light on the link between the bible and history

King David is a pivotal figure in the Bible, which tells his life story in detail and gives stirring accounts of his deeds, including the slaying of the Philistine giant Goliath and the founding of his capital in Jerusalem. But no certain archaeological finds from the period of his reign or of the kingdom he ruled over have ever been uncovered—until now.

In this groundbreaking account, the excavators of Khirbet Qeiyafa in the Valley of Elah, where the Bible says David fought Goliath, reveal how seven years of exhaustive investigation have uncovered a city dating to the time of David— the late eleventh and early tenth century BCE—surrounded by massive fortifications with impressive gates and a clear urban plan, as well as an abundance of finds that tell us much about the inhabitants. Discussing the link between the Bible, archaeology, and history In the Footsteps of King David explains the significance of these discoveries and how they shed new light on David’s kingdom. The topic is at the center of a controversy that has raged for decades, but these findings successfully challenge scholars disputing the historicity of the Bible and the chronology of the events recounted in it.

Saar Ganor is an archaeologist with the Israel Antiquities Authority. He codirected the excavations at Khirbet Qeiyafa.

Praise For In the Footsteps of King David: Revelations from an Ancient Biblical City…

An engaging glimpse into the ancient past [and] a worthwhile work on a number of counts. Though sometimes a bit technical, the book is a fascinating glimpse into the methods, rigors, and rewards of archaeology. On another level, the authors add to a larger conversation about the historicity of the Bible while describing a find of true significance.

The parts of the book that are not detailing the archaeological findings summarize the sometimes-conflicting biblical tradition regarding David’s life and past archaeological study of the region.