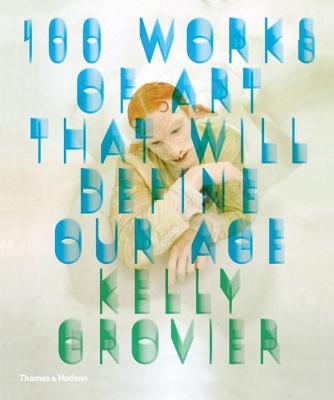 100 Works of Art That Will Define Our Age (Hardcover)

Bold and engaging predictions of which artists and artworks from the past two decades will endure through their power to question, provoke, and inspire

Just as Picasso’s Guernica or Gericault’s Raft of the Medusa survive as powerful cultural documents of their time, there will be works from our own era that will endure for generations to come.

Kelly Grovier curates a compelling list of one hundred paintings, sculptures, drawings, installations, performances, and video pieces that have made the greatest impact from 1989 to the present. The global cast includes Marina Abramovic , Matthew Barney, Christian Boltanski, Louise Bourgeois, Maurizio Cattelan, Marlene Dumas, Olafur Eliasson, Andreas Gursky, Cristina Iglesias, On Kawara, Jeff Koons, Ernesto Neto, Gerhard Richter, Pipilotti Rist, Kara Walker, and Ai Weiwei. Many of the pieces reflect the cultural upheavals of recent times, from the collapse of the Berlin Wall to the blossoming of the Arab Spring.

A daring yet convincing analysis of which artworks best capture the zeitgeist of our time, Grovier’s list also provides a much-needed map through the landscape of contemporary art. Illustrations of key works are supplemented by comparative images, and short texts offer a biography of each artwork, tracing its inception and impact, and offering a view not only into the imagination of the artist but into the age in which we live.

Kelly Grovier is a poet, historian, and cultural critic. He is a regular contributor on art to the Times Literary Supplement, and his writing has appeared in numerous publications, including the Observer, Sunday Times, and Wired. Educated at the University of California, Los Angeles, and at the University of Oxford, he is the author of 100 Works of Art That Will Define Our Age and Art Since 1989.

Praise For 100 Works of Art That Will Define Our Age…

Invites reflection on some of the best-known contemporary artists as well as offering some less publicly celebrated works.

From his phrasing of its title to his choices of artists and the works by them, if nothing else will get people arguing over the art of their time, Grovier’s book will.

Boldly going where few other art books have gone before.

An ambitious and convincing survey of contemporary art that hovers delightfully between criticism, history, and an art lover's poetic tribute.

At once a major look at contemporary artworks and a personal investigation of the self-image provoked by them. . . . A major addition to the literature of art criticism and philosophy.

A daring and convincing analysis of seminal artworks of our age.

Although it is impossible to know exactly which pieces of art will survive from our era, Kelly Grovier has put together a list of 100 works of art that have made the greatest impact from 1989 to the present.

Despite the book’s Buzzfeed-like title, this is a serious guide and not a superficial list. The author carefully builds a case for each work.