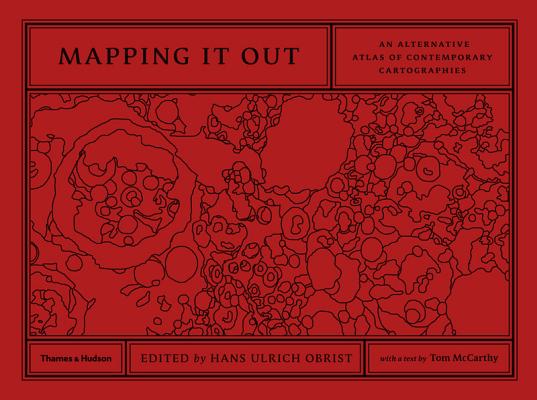 An Alternative Atlas of Contemporary Cartographies

A look at our exterior and interior worlds through intriguing and imaginative maps from over 130 contributors in the fields of art, science, film, and more

Maps have always been at the heart of human knowledge. Whether they chart a newly discovered land or lay out a complicated process, maps serve to improve our understanding of what surrounds us. Maps make the complex simple, and reveal the complexity behind the apparently simple. Mapping It Out invites artists, architects, writers, and designers, geographers, mathematicians, computer pioneers, scientists, and others from a host of fields to create a personal map of their own, in whatever form and showing whatever terrain they choose, whether real-world or imaginary.

Over 130 contributors’ ideas are represented, including Yoko Ono, Louise Bourgeois, Damien Hirst, David Adjaye, Ed Ruscha, Alexander Kluge, and many more. Some contributors have translated scientific data into simplified visual language, while others have condensed vast social, political, or natural forms into concise diagrams. There are reworked existing maps, alternate views of reality, charted imaginary flights of fancy, and the occasional rejection of a traditional map altogether.


Praise For Mapping It Out: An Alternative Atlas of Contemporary Cartographies…

The collection is stunning in its breadth: Renderings of imagined utopian lands, ideas, scientific phenomena, human migration and—simply—the unmappable all reveal the political and playful impulses in mapmaking.
— Departures

A collection of dazzling and provocative alternative maps that will make you rethink the world we live in.
— Entertainment Weekly

A magnificent compendium. . . . The volume’s greatest gift and highest point of differentiation is, in fact, precisely the sensibility for which Obrist is known and celebrated—the cross-pollination of disciplines, which invites the various fields to enrich one another.
— Brain Pickings

Brings artistry and imagination back into mapmaking. . . . The result is a visually arresting volume filled with works by the likes of Yoko Ono, Matthew Barney, Ed Ruscha, and Gilbert and George.
— Fast Co.DESIGN

This collection . . . prompts questions about what defines a map, and also about the notion of any map being definitive. It’s an open-ended invitation to see the world afresh.
— Passport

Hans Ulrich Obrist is an art historian and Director of International Projects at the Serpentine Gallery.

Tom McCarthy is a writer and artist. His previous books include Remainder and Men in Space.
Loading...
or
Not Currently Available for Direct Purchase