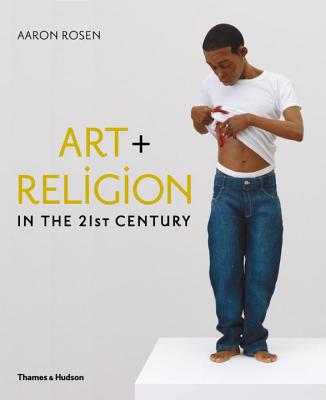 The relationship between art and religion has been long, complex, and often conflicted, and it has given rise to many of the greatest works in the history of art. Artists today continue to reflect seriously upon religious traditions, themes, and institutions, suggesting a new approach to spirituality that is more considered than confrontational.

Art & Religion in the 21st Century is the first in-depth study to survey an international roster of artists who use their work to explore religion’s cultural, social, political, and psychological impact on today’s world. An introduction outlines the debates and controversies that the art/religion connection has precipitated throughout history. Each of the book’s ten chapters introduces a theme—ideas of the Creation, the figure of Jesus, the sublime, wonder, diaspora and exile, religious and political conflict, ritual practice, mourning and monumentalizing, and spiritual “dwelling” in the body and in space—followed by a selection of works of art that illustrates that theme. Artists discussed include Vanessa Beecroft, Maurizio Cattelan, Makoto Fujimura, David LaChapelle, Annette Messager, Jason Rhoades, Andres Serrano, and Zeng Fanzhi.

Aaron Rosen is a Senior Lecturer at Rocky Mountain College, Montana. He is the author of Art + Religion in the 21st Century, and is a guest curator at the Jewish Museum London.

Praise For Art & Religion in the 21st Century…

Ranging internationally and bringing les familiar artists together with certified stars, Rosen offers a useful encyclopedia of artworks that address a wide range of spiritual concerns. In a determined effort at interfaith pluralism, he reaches out to all the world religions. Along with the three major monotheistic faiths, the book references Buddhism, Taoism, Hinduism, African and Australian animism and Native American tribal beliefs… [Offers] support for a growing critical acknowledgment of the role of belief in contemporary art.

Rosen’s demonstration of the multiple ways in which modern artists are engaging with religion will be of great benefit to those interested in modern art as well as individuals curious about religion and its impact on present-day culture.

Rosen explores faith in contemporary art, from Kehinde Wiley’s portrayal of Israelis living on the margins to provocative updates on the Last Supper.

Rosen’s tour of contemporary art’s religious experiments is hopeful and informative. The numerous examples found throughout Art and Religion in the 21st Century give the reader a substantive view of contemporary artists’ use of religious ideas. Rosen’s book opens the door to this important and challenging subject.


Crammed with countless color images, this book is a pleasure to look at and touch...a beautiful book and one that engrossed me as I read and looked...Moving away from more explicit religious iconography, Rosen encourages his readers to search out the sacred in art forms which, at first glance, may appear to have little to do with religion. But through his discussions of religious iconography, the sublime, culture, ritual, and indwelling, he demonstrates that the sacred in art is never far from our gaze.

The connection between art and religion dates back to the days when our knuckles brushed the dust. If you thought that in our modern culture that relationship was about only blasphemy and shock, this is a book to persuade you otherwise.

It's not often one can say of a book for review, 'this is exactly what I have been waiting for.' But Aaron Rosen's is just that...Spending time with the artists in this book is like walking through an ambitious, perceptively curated, global art exhibition on this immensely important subject.

Something of an objet d’art in its own right, Aaron Rosen’s lavishly illustrated book Art & Religion in the 21st Century recognizes and refutes the (supposedly antagonistic) separation of religion and contemporary art....Rosen’s project in this much-needed and all-too-rare book on contemporary art from a religious studies perspective is to demonstrate that the supposed rift between art and religion has been greatly exaggerated....The well-conceived format, content, and general approach of Art & Religion make it eminently amenable to classroom use....Art & Religion, with its enthusiastically interdisciplinary approach, its exploration of a variety of mediums and modes of art-making, and its capacious representation of artists from across various religious and cultural backgrounds, is likewise an occasion for thinking through new possibilities for studying religion and contemporary art....Rosen’s book, brimming with examples, is a wonderful resource, offering numerous ways of entering into and adjusting the frames of debates whose urgency is only increasing