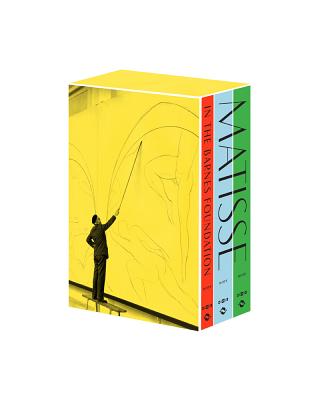 Matisse in the Barnes Foundation

A landmark volume—the first authoritative publication to cover in its entirety one of the most significant holdings of Matisse in the world.

Matisse in the Barnes Foundation is a vibrant celebration—slip-cased and beautifully produced—of the Barnes’s extraordinary Matisse collection; comprised of fifty-nine works from every stage of the artist’s career, it is among the most important in the world.

At the heart of the collection are Matisse’s most historically significant paintings, Le Bonheur de vivre, also called The Joy of Life, and The Dance, the monumental mural that Albert C. Barnes commissioned to fill the lunettes of the Foundation’s main gallery, transforming both the space and the artist’s career. An essay by editor Yve-Alain Bois addresses the evolution of The Dance and its role in Matisse’s career.

An essay by Karen Butler looks at what Barnes thought of Matisse; Claudine Grammont considers how and why he collected his work. The works themselves, sumptuously reproduced, are the subjects of interpretive analyses that tell the stories of their acquisition and address their critical reception. The book includes major contributions by Barbara Buckley and Jennifer Mass on the artist’s technique and a report on the latest findings on the pigments used in Le Bonheur de vivre.


Praise For Matisse in the Barnes Foundation: 3 Vol. Set…

Matisse in the Barnes Foundation is an 181-pound, 3-volume set with more than 600 sumptuous color reproductions [and] may be one of the most gorgeous coffee-table books you will ever own. As it happens, Matisse in the Barnes Foundation is much more than a pretty face. Once you’ve read the 90,000-word essay by Yve-Alain Bois, as well as the insightful commentaries on all the paintings by independent art historians Claudine Grammont and Karen K. Butler, you may never see the former Fauve’s art the same way again. If you can’t make it to Philadelphia, you couldn’t ask for a better guide to Matisse’s work than this three-volume set devoted to one of the modern period’s greats.

Yve-Alain Bois is an author and professor of Art History at the Institute for Advanced Study, Princeton, New Jersey.

Claudine Grammont is an independent scholar.

Barbara Buckley is the head of the Conservation Department at the Barnes.

Jennifer Mass is a senior scientist in the Analytical Department at Winterthur Museum, Delaware.
Loading...
or
Not Currently Available for Direct Purchase