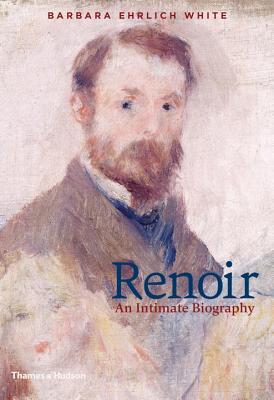 Expertly researched and beautifully written by the world’s leading authority on Auguste Renoir’s life and work, Renoir fully reveals this most intriguing of Impressionist artists. The narrative is interspersed with more than 1,100 extracts from letters by, to, and about Renoir, 452 of which come from unpublished letters. Renoir became hugely popular despite great obstacles: thirty years of poverty followed by thirty years of progressive paralysis of his fingers. Despite these hardships, much of his work is optimistic, even joyful. Close friends who contributed money, contacts, and companionship enabled him to overcome these challenges to create more than 4,000 paintings. Renoir had intimate relationships with fellow artists (Caillebotte, Cézanne, Monet, and Morisot), with his dealers (Durand-Ruel, Bernheim, and Vollard) and with his models (Lise, Aline, Gabrielle, and Dédée). Barbara Ehrlich White’s lifetime of research informs this fascinating biography that challenges common misconceptions surrounding Renoir’s reputation.

Since 1961 White has studied more than 3,000 letters relating to Renoir and gained unique insight into his personality and character. Renoir provides an unparalleled and intimate portrait of this complex artist through images of his own iconic paintings, his own words, and the words of his contemporaries.

“Barbara White is a biographer of courage, seriousness and unrelenting honesty. She has read and dissected about 3,000 letters about Renoir written by him, his friends, his family, as well as the newspapers of the day. Practically every member of the Renoir family has entrusted their personal documents to her – a pledge of trust totally deserved. Whenever I am asked a question about Auguste, I write to Barbara to ask her opinion or call on her knowledge, since she has become an indisputable reference for me. She is always careful and verifies facts and contexts by every route possible. The Renoir family, and Auguste himself, are very lucky that Barbara is so passionate about her subject, and I feel personally lucky to know her. I thank her from the bottom of my heart for this work of a lifetime – a magnificent success. I am very pleased that her book has been edited by the quality editors at Thames & Hudson, as it will remain a point of reference for many generations to come.” – Sophie Renoir (great-granddaughter of Auguste Renoir, granddaughter of his eldest son Pierre, and daughter of Renoir’s grandson Claude Renoir, Jr.), June 7, 2017


Praise For Renoir: An Intimate Biography…

Comprehensive and authoritative…provides an account of the artist’s life, work and impact from a contemporary and inside viewpoint. It is a compelling and engaging read.
— The Artist (UK)

White's scholarly biography is the result of ‘56 years of professional concentration on Renoir's paintings, character and personality.’ The research is here, and it's impressive. We learn about the Impressionists with whom Renoir traveled and the official Salon against which they sometimes rebelled. Manet, Monet, Cézanne and Pissarro all make appearances, as does the art dealer Paul Durand-Ruel, who created a market for these painters. Along the way, we also learn a great deal about 19th¬century French society and mores.
— The New York Times Book Review

A well-rounded view of the artist’s personal and professional life… White’s readable, intriguing study sheds new light on misconceptions regarding Renoir’s personality. Readers with prior knowledge of the artist will love to learn more, while those interested in the impressionists will enjoy peeking into the lives of artists such as Monet, Cézanne, and others.
— Library Journal (starred review)

The Renoir portrayed here is a generous, cheerful man but also a furtive and sometimes duplicitous one, a painter of genius who often churned out hackwork, a loving husband who constantly worried his wife would find out about the systematic lies he'd been telling her for years. It's a Renoir scarcely hinted at in the sunny swirl of his paintings – and all the more fascinating for that.
— Christian Science Monitor

Moving… Renoir: An Intimate Biography is Ms. White’s second study of the painter, drawing on an additional 2,000 letters made available to her since her Renoir: His Life, Art, and Letters appeared in 1984. Through her command of Renoir’s correspondence we get vivid glimpses of his inner life.... She is reliably content to let Renoir speak for himself, allowing his grounded aims, temperament, and wit to shine through.

An in-depth biography of the French impressionist painter… ideal for readers seeking to delve deeply into Renoir's personality. White, one of the leading authorities on the life and work of Renoir, offers an ‘intimate’ look into his life, a narrative fueled by her amassing a cache of more than 3,000 letters—many from the families of Renoir's illegitimate daughter, Jeanne, and his three sons, including the great film director Jean, as well as from fellow artists. They shed particular light on his relationships with key women in his life, especially his wife, female models, and fellow artist Berthe Morisot.
— Kirkus Reviews

A moving biography of French impressionist painter Auguste Renoir, sourced from thousands of letters and hundreds of previously unpublished writings by the artist, his family, and his friends, including many first-generation impressionists. White's research is exhaustive, her enthusiasm is infectious, and her style is unaffected, ensuring chat this touching biography will enjoy a broad readership encompassing both specialists and general art enthusiasts alike.
— Publishers Weekly

White has studied Renoir for more than half a century and here draws on some ‘3,000 letters by, to and about’ him. Using that correspondence and the fruits of her life’s research, she creates a finely nuanced portrait of depth and feeling. Studded with stirring quotations from unpublished letters and embellished with reproductions of many of Renoir’s most-beloved works, this is a jewel of a biography, and it will be treasured by anyone interested in art.
— Booklist

For Renoir devotees, this is an unmissable, revelatory account… This documentary life, based on thousands of letters, many unpublished, which White has collected since 1961, is the most personal account of any Impressionist ever written. It engages with Renoir from a domestic rather than art historical perspective, bringing to quotidian life the stick-thin, wiry, energetic painter, pipe in mouth, as he converses in a rasping guttural Paris accent to friends and lovers, rearranges his cluttered studio, chats to servants in the grand homes of his collectors. Nineteenth-century Parisian bohemia has long been frozen into myth; White’s return to primary sources allows her to catch the timbre of felt experience.
— Financial Times

No one, not even Renoir himself, can ever have commanded so much information on the topic.
— Daily Telegraph

Admirably thorough… In her comprehensive biography, White has created a cradle-to-grave account that quotes liberally from the 3,000 letters to, from or about Renoir that she has amassed over the past 50 years. She uses them to show, above all, a painter dedicated to becoming a better artist.
— Sunday Times (London)

Renoir would have been grateful for the thoroughness with which his new biographer Barbara Ehrlich White has peeled away the myths and the lies first disseminated by his son Jean Renoir in an early hagiography of his father. Drawing on hundreds of unpublished letters, Renoir: An Intimate Biography reveals how the poor man fought back for so long against illness, and created an entire fantastical world of overflowing nudes or near-nudes as a form of consolation for his creeping physical decrepitude.
— The Independent (UK)

Scholars of Renoir will be indebted to White for assembling so many new letters that shed fresh light on the texture of Renoir’s family life, friendships and daily routines…White’s diligent work does reveal the ‘manipulative personality’ of her subject more candidly than ever before, laying bare both his contradictions and the release he found from them in the illusions of painting.
— Literary Review

In this new biography, White extends her research far beyond her earlier work, Renoir: His Life, Art and Letters… White delves into Renoir's complicated and contradictory personality, largely by looking at his relationships with key women, noting repeatedly that his warm and happy domestic scenes were at odds with a duplicitous, secretive nature and a stormy marriage. White dismisses long-held allegations of misogyny and anti-Semitism, concluding that Renoir is an inspiring, heroic figure and, on occasion, an amazingly gifted portrayer of hedonism and sensuality… Recommended.
— CHOICE

Barbara Ehrlich White is Adjunct Professor Emerita of Art History at Tufts University, Massachusetts. She is the author of Renoir: His Life, Art and Letters, Impressionism in Perspective, and Impressionists Side by Side. She is the recipient of the Chevalier des Arts et des Lettres.
Loading...
or support indie stores by buying on