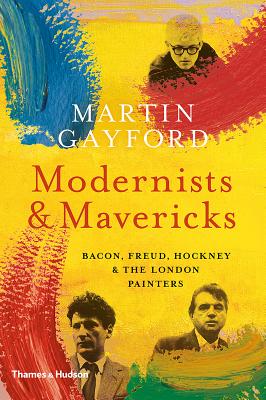 Martin Gayford’s masterful account of painting in London from the Second World War to the 1970s, illustrated by documentary photographs and the works themselves

The development of painting in London from the Second World War to the 1970s has never before been told before as a single narrative. R. B. Kitaj’s proposal, made in 1976, that there was a “substantial School of London” was essentially correct but it caused confusion because it implied that there was a movement or stylistic group at work, when in reality no one style could cover the likes of Francis Bacon and also Bridget Riley.

Modernists and Mavericks explores this period based on an exceptionally deep well of firsthand interviews, often unpublished, with such artists as Victor Pasmore, John Craxton, Lucian Freud, Frank Auerbach, Allen Jones, R. B. Kitaj, Euan Uglow, Howard Hodgkin, Terry Frost, Gillian Ayres, Bridget Riley, David Hockney, Frank Bowling, Leon Kossoff, John Hoyland, and Patrick Caulfield. But Martin Gayford also teases out the thread weaving these individual lives together and demonstrates how and why, long after it was officially declared dead, painting lived and thrived in London. Simultaneously aware of the influences of Jackson Pollock, Giacometti, and (through the teaching passed down at the major art school) the traditions of Western art from Piero della Francesca to Picasso and Matisse, the postwar painters were bound by their confidence that this ancient medium could do fresh and marvelous things, and explored in their diverse ways, the possibilities of paint.


Praise For Modernists and Mavericks: Bacon, Freud, Hockney and the London Painters…

If you are interested in modern British art, the book is unputdownable. If you are not, read it. You soon will be.
— Financial Times

Martin Gayford has been talking with artists for 30 years. He doesn’t just nip into the studio with a notepad: he has a gift for sustaining conversations that unfold across decades… Other studies have debated the effects of state art funding and cold war cultural politics; this one brings us the expression of Leon Kossoff as he moves through heaven and hell with each brushstroke, Bridget Riley introducing the whisker of white that makes a black painting live, Gillian Ayres and Howard Hodgkin talking hour after hour in the car down to Bath School of Art.
— The Guardian

[A] superb survey of British painting from 1945 to 1970, London… Gayford recounts the artists’ lives and their travails with sympathy and understanding… [a] wonderfully accomplished book, full of anecdotes and aperçus.
— The Times (London)

Superb… Gayford deploys Bacon’s voice to brilliant effect, and you hang on to every word… This is a book about community and influence; about the connections, sometimes powerfully strong and sometimes only thread-like, between artists of dizzying talent and wildly varying impulses.
— Observer Review

A masterpiece, a major work of modern art history… As [Martin Gayford] traces London’s art scene from the 1940s to the 1970s, the configuration of friends and rivals he presents is as lucid as a family tree... filled with vivid anecdotes that might have otherwise disappeared into the Soho air.

“There’s a wonderful sense of intimacy and an abundance of critical insights in Martin Gayford’s vivid portrait of Britain’s post-World War II modernist painters… Well-documented and elegantly written…Gayford covers terrain from the historical to the biographical, from the sociological to the psychological, from the stylistic to the technical.”
— ARTnews

Through interviews, anecdotes, and ample illustrations, Gayford brings to life London’s art world… By focusing on the art, Gayford convinces readers that postwar-London artists were right: painting really can do marvelous things.
— Booklist

A radical reassessment of the School of London canon… Engaging and erudite… Gayford offers a rethinking of his complex subject that is pluralistic and inclusive, nuanced in its examination of individual artists, and precisely attuned, from beginning to end, to today’s critical issues.
— Art in America

Absorbing and lavishly illustrated… encompasses art history and biography… But the main subject is painting itself, confounding and inspiring in ‘its moral value and its sheer difficulty.
— The New Yorker

Martin Gayford is an art critic for The Spectator. His books include Modernists & Mavericks, Man with a Blue Scarf, A Bigger Message, Rendez-vous with Art (with Philippe de Montebello), A History of Pictures (with David Hockney), and most recently, The Pursuit of Art.
Loading...
or support indie stores by buying on