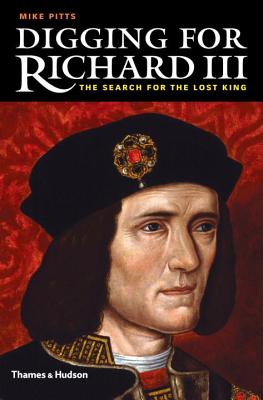 The Search for the Lost King

The story of the archaeology behind the dig that found Richard III, told through a fascinating array of photographs, diagrams, and firsthand accounts

In August 2012 a search began and on February 4, 2013 a team from Leicester University delivered its verdict to a mesmerized press room, watched by media studios around the world: they had found the remains of Richard III, whose history is perhaps the most contested of all British monarchs.

History offers a narrow range of information about Richard III which mostly has already been worked to destruction. Archaeology creates new data, new stories, with a different kind of material: physical remains from which modern science can wrest a surprising amount, and which provide a direct, tangible connection with the past. Unlike history, archaeological research demands that teams of people with varied backgrounds work together. Archaeology is a communal activity, in which the interaction of personalities as well as professional skills can change the course of research. Photographs from the author’s own archives, alongside additional material from Leicester University, offer a compelling detective story as the evidence is uncovered.

Praise For Digging for Richard III: The Search for the Lost King…

Highly recommended. [Mike] Pitts effectively conveys the excitement of the discovery, clearly and vividly describing the process and the personalities. Writing this book must have been the dream of a lifetime for him, and he has risen to the occasion. STARRED REVIEW
— Kirkus Reviews

As gripping as any detective fiction. . . . Pitts’s book is proof that one doesn’t need to be fascinated with Richard III to be enthralled by the story of his body’s discovery.
— Publishers Weekly

This remarkable cold-case-file narrative is a must for all English history buffs.
— Library Journal

This compelling and easily accessible account of the dig for the remains of King Richard III of England will appeal to a broad cross-section of readers, including history, mystery, and archaeology buffs. Combining Richard’s history and demise, the physical excavation itself, and cutting-edge forensic science involved, the author seamlessly weaves this centuries-in-the-making tale into a dramatic thriller. Pitts is an archaeologist himself, and his passionate enthusiasm for his subject matter is contagious.
— Booklist/American Library Association

A readable archaeological perspective on the dig that led to the sensational discovery in 2012 of the skeleton of England’s King Richard III, buried in 1485. . . . Highly recommended.
— Choice

Pitts recounts the exhilarating dig--in which the lead archaeologist promised to eat his hat if the skeleton actually turned up.
— Scientific American

An amazing story.
— The Dispatch

It reads like an Indiana Jones adventure, albeit without the obligatory bad guys.
— Portland Book Review

At its liveliest, Pitts' account reads like a police procedural, with clues, false leads, and finally a killing unraveled and a mystery triumphantly solved.... As much about the diggers as about who or what they dug up.
— The Dallas Morning News

This fascinating and informative book of the search for and discovery of the controversial king’s remains in a parking lot incorporates English history, archaeology and forensics.
— Redlands Daily Facts

Mike Pitts is the author of Digging up Britain, Digging for Richard III, and Hengeworld. He is the editor of British Archaeology magazine and is a trained archaeologist with firsthand experience digging at Stonehenge. He has presented at countless events and talks at Stonehenge.