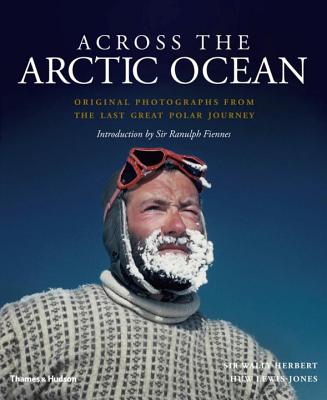 Across the Arctic Ocean (Hardcover)

An unparalleled look at the first surface crossing of the Arctic Ocean, and probably the first expedition to reach the North Pole by surface travel, through the words and images of the man who led it

On February 21, 1968, Wally Herbert and his team of three companions and forty huskies set out from Point Barrow, Alaska, embarking on a route that would take them some 3,800 miles over sixteen months, across the North Pole and the frozen Arctic Ocean via its longest axis. Though their achievement was overshadowed by the Apollo moon landing, it stands today as one of the greatest expeditions of all time.

Featuring an impressive team of expert commentators and illustrated with stunning photographs, this exceptional photography book is an engrossing firsthand record of an astonishing journey—one that will probably never be repeated.

The Arctic Ocean as a whole is attracting worldwide attention because of global warming, the shrinking ice cap, the opening up of new northerly trade routes, and competition between nations for potentially vast untapped mineral resources.

Across the Arctic Ocean is therefore a truly timely account of the last great frontier in a rapidly changing world and will appeal to all those interested in exploration, polar science, the great outdoors, and human endeavor.

Sir Wally Herbert was a polar traveler and an award-winning writer and artist. His books include his memoirs, The Polar World. He died in 2007.

Huw Lewis-Jones is a historian of exploration who travels in the Arctic and Antarctica each year as a polar guide. He was formerly a curator at the Scott Polar Research Institute, Cambridge, and the National Maritime Museum, London. His books include The Writer’s Map: An Atlas of Imaginary Lands, Explorers’ Sketchbooks: The Art of Discovery & Adventure, and The Sea Journal: Seafarers’ Sketchbooks.

Praise For Across the Arctic Ocean: Original Photographs from the Last Great Polar Journey…

Brings new life to this nearly forgotten journey… With hundreds of stunning photographs, entries from Herbert's journals, an introduction from explorer Sir Ranulph Fiennes, and original documents from the Herbert collection, Across the Arctic Ocean is perfect for the adventurous and travel-minded. With the future of the Arctic threatened by climate change and development, it is a timely reminder of its austere glory.