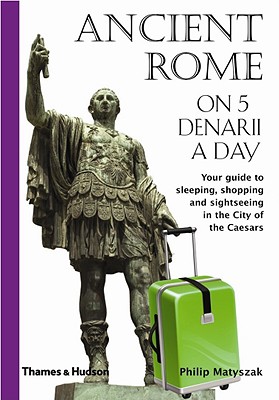 Ancient Rome on 5 Denarii a Day (Traveling on 5) (Paperback)

"History buffs (or, indeed, anyone with a vivid imagination) will enjoy this witty and erudite—and most unusual—travel guide."—Chicago Tribune

This entertaining guide provides all the information a tourist needs for a journey back in time to ancient Rome in AD 200. You just have to pack your imagination and a toothbrush! Here is advice on arranging the sea journey to Italy, how to negotiate the road to Rome, and what to see on each of the city's famous seven hills. You'll learn what to take to a fancy dinner party (dining robe, your own napkin, and indoor shoes) and where to find the best markets and public baths.

A series of walks takes in all the sights of the eternal city, from the opulence of the imperial palace on the Palatine hill through the bustle of the Forum to the grandeur of the Pantheon and the Temple of Jupiter. The largest and most populous city in the ancient world has over one hundred spectacles to offer, including chariot races and events at the Colosseum where gladiators fight to the death. Philip Matyszak's ingenious book will appeal to anyone who has ever wondered what it would have been like to visit the greatest city of ancient times.

Philip Matyszak has a doctorate in Roman history from St. John’s College, Oxford.  He is the author of numerous books on the ancient world, including the highly successful Legionary: The Roman Soldier’s (Unofficial) Manual, The Greek and Roman Myths, and Ancient Magic.
or
Buy Here
Copyright © 2020 American Booksellers Association