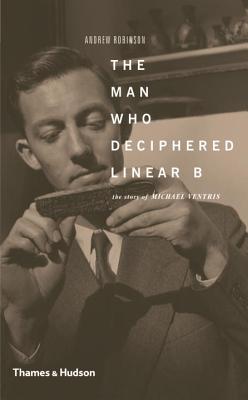 The Man Who Deciphered Linear B

The Story of Michael Ventris

“Highly readable . . . a fitting tribute to the quiet outsider who taught the professionals their business and increased our knowledge of the human past.”—Archaeology Odyssey

More than a century ago, in 1900, one of the great archaeological finds of all time was made in Crete. Arthur Evans discovered what he believed was the palace of King Minos, with its notorious labyrinth, home of the Minotaur. As a result, Evans became obsessed with one of the epic intellectual stories of the modern era: the search for the meaning of Linear B, the mysterious script found on clay tablets in the ruined palace.

Evans died without achieving his objective, and it was left to the enigmatic Michael Ventris to crack the code in 1952. This is the first book to tell not just the story of Linear B but also that of the young man who deciphered it. Based on hundreds of unpublished letters, interviews with survivors, and other primary sources, Andrew Robinson’s riveting account takes the reader through the life of this intriguing and contradictory man. Stage by stage, we see how Ventris finally achieved the breakthrough that revealed Linear B as the earliest comprehensible European writing system.


Praise For The Man Who Deciphered Linear B: The Story of Michael Ventris…

Mr. Robinson has given us a glimpse of genius at work, making significant connections between the work and the life.
— New York Sun

Intrinsically fascinating. Robinson . . .has done more than retell the tale, albeit in a more accessible form than ever before.
— The Boston Globe

Andrew Robinson has written more than twenty-five books on the arts and sciences. They include Lost Languages: The Enigma of the World's Undeciphered Scripts, India: A Short History, and Earthshock, which won the Association of Earth Science Editors Outstanding Publication Award. He is also a regular contributor to magazines, such as Current World Archaeology, History Today, The Lancet, Nature, and Science. A former literary editor of The Times Higher Education Supplement, he was also a visiting fellow at the University of Cambridge.