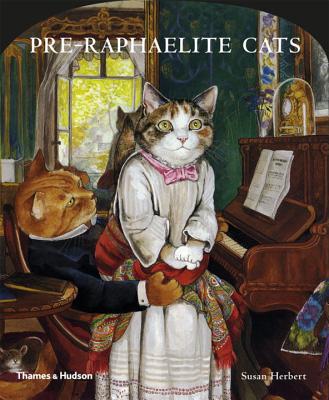 “No matter how many times one has viewed the paintings . . . here, there’s something particularly entrancing about seeing their subjects portrayed by cats. . . . Great fun.” —Victorian Decorating & Lifestyle

Susan Herbert's feline versions of famous paintings have found an appreciative audience among both cat and art lovers. Here, she brings her charming illustrations of cats to the subject of Pre-Raphaelite painting.

Well-known works by such artists as Dante Gabriel Rossetti, Ford Madox Brown, Edward Burne-Jones, and William Holman Hunt can be viewed in a new and entrancing way when their protagonists are endearing cats. The Beggar Maid takes on a particularly touching relationship with King Cophetua, while Medea gives new meaning to the word enchantress as she prepares the ingredients for a spell. Were ever two creatures so frightened and so abandoned as the poor cat princes wickedly imprisoned in the tower or two lovers as sad and stoical as the young officer cat and his fiancée on the eve of the Battle of Waterloo? With black-and-white reproductions of the original paintings that inspired these illustrations, the book offers irresistibly delightful comparisons to a great period in art history.

Susan Herbert (1945–2014) was one of the most distinctive and popular cat artists. She studied at the Ruskin School of Drawing and Fine Art, University of Oxford. She was the author and illustrator of The Cats Gallery of Art, The Cats History of Western Art, Diary of a Victorian Cat, Medieval Cats, Pre-Raphaelite Cats, Shakespeare Cats, Opera Cats, and Movie Cats.
Loading...
or
Not Currently Available for Direct Purchase