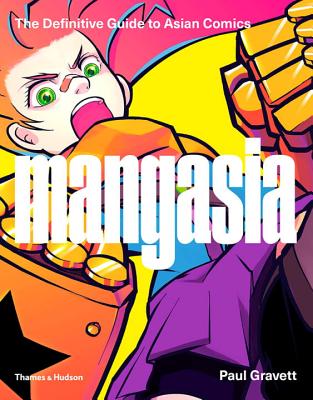 The Definitive Guide to Asian Comics

An exhaustive and visually engaging account, Mangasia charts the evolution of manga from its roots in late nineteenth-century Japan through the many and varied forms of comics, cartoons, and animation created throughout Asia for more than one hundred years.

World authority on comic art Paul Gravett details the evolving meanings of the myths and legends told and retold by manga artists of every decade and reveals the development and cross pollination of ideas between manga artists throughout Asia. He explores the explosion of creativity in manga after the Second World War and highlights how creators have responded to political events since 1950 in the form of propaganda, criticism, and commentary in manga magazines, comics, and books.

With maps, timelines, and reproductions from Japan, China, Taiwan, North Korea, South Korea, Thailand, Malaysia, Indonesia, Cambodia, the Philippines, Vietnam, India, and Bangladesh, this book is the first to explain the significance of key themes, the meanings of embodied myths, and the connections between various manga traditions.

Praise For Mangasia: The Definitive Guide to Asian Comics…

Visually stunning but also meticulously researched, this book has something for casual manga fans and serious art students alike. Most of the book’s pages are devoted to more than 1,000 full-color reproductions of comic art representing a wide range of periods, styles, and genres.
— Booklist

Paul Gravett is the director of Comica, the London International Comics Festival, and writes about comics for a variety of periodicals. His recent books include Graphic Novels: Stories to Change Your Life, Comics Art, and, with John Harris Dunning, Comics Unmasked: Art and Anarchy in the UK.
Loading...
or support indie stores by buying on