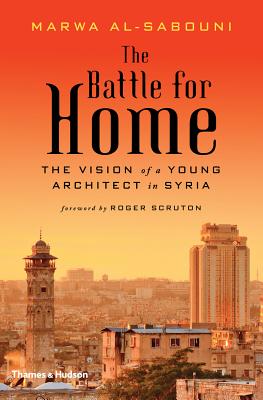 The Battle for Home (Hardcover)

The Vision of a Young Architect in Syria

An architect’s gripping account of living and working in war-torn Syria, and the role architecture plays in whether a community crumbles or comes together

Drawing on the author’s personal experience of living and working as an architect in Syria, this timely and fascinating account offers an eyewitness perspective on the country’s bitter conflict through the lens of architecture, showing how the built environment and its destruction hold up a mirror to the communities that inhabit it.

From Syria’s tolerant past, with churches and mosques built alongside one another in Old Homs and members of different religions living harmoniously together, the book chronicles the recent breakdown of social cohesion in Syria’s cities. With the lack of shared public spaces intensifying divisions within the community, and corrupt officials interfering in town planning for their own gain, these actions are symptomatic of wider abuses of power.

With firsthand accounts of mortar attacks and stories of refugees struggling to find a home, The Battle for Home is a compelling explanation of the personal impact of the conflict and offers hope for how architecture can play a role in rebuilding a sense of identity within a damaged society.

Marwa al-Sabouni has a PhD in Islamic architecture and runs a private architectural studio in Homs, Syria. She has written for Architectural Review and Wall Street International. She is co-owner of the first and only online media site dedicated to architectural news in Arabic, Arch News.

Roger Scruton is a writer and philosopher. His books include The Dictionary of Political Thought, A Land Held Hostage: Lebanon and the West, and The Aesthetics of Architecture.

Praise For The Battle for Home: The Vision of a Young Architect in Syria…

Absolutely compelling… A singular perspective on the ongoing conflict in Syria [that] describes the destruction it has visited on the built environment and the high human toll Syrians have suffered, [and] also considers the more nuanced roles architecture and planning have played amid the chaos. (Starred Review)


The Battle for Home is Sabouni’s elegy to her devastated town, a memoir about survival, and a kind of manifesto, stressing the importance of architecture and urbanism for our understanding of the deeper roots of Syria’s conflict and the seeds of civil war. Sabouni contends that Syria’s built environment helped create the conditions for a popular uprising-turned-civil war. Her hope is that better, fairer urban development, policy, and architecture can aid eventual reconciliation.