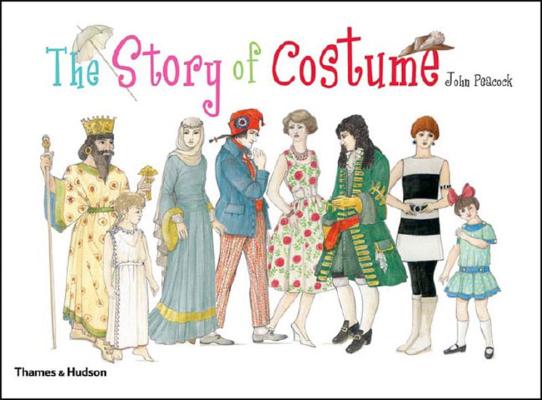 The Story of Costume (Hardcover)

An essential reference for parents, teachers, librarians, and anyone working with children's theater groups.

This full-color introduction to historical costume was created especially for children by John Peacock, a former senior costume designer for the BBC. With over 320 illustrations plus clearly written descriptions, the book offers a broad survey of Western costume from ancient times to the present day. It will be an invaluable resource for teachers and librarians who want to help children imagine what the historical characters they are studying really looked like.

The book contains detailed drawings of men, women, and children wearing examples of clothing from every period. Some of the most eye-catching trends in costume history are featured, including knights' armor from the thirteenth century, the exaggeratedly pointed shoes worn in the fifteenth century, and the curled and powdered wigs of the eighteenth century. Each costume, whether worn by an Egyptian queen, a medieval court jester, or a schoolmistress in the Old West, is meticulously drawn and concisely described. Every historical period is covered, from the Ancient World to modern times, spanning a broad array of groups, from servants and laborers to nobility and royalty, and every aspect of fashion, including shoes, hats, and other accessories, plus jewelry and hairstyles.

John Peacock was Senior Costume Designer for BBC Television for many years. His many books include The Complete Fashion Sourcebook; Costume: 1066 to the Present; The Chronicle of Western Costume; Twentieth-Century Fashion; Fashion Since 1900; Fashion Accessories; Shoes; Men's Fashion; Twentieth-Century Jewelry; and many others.
or
Not Currently Available for Direct Purchase
Copyright © 2020 American Booksellers Association