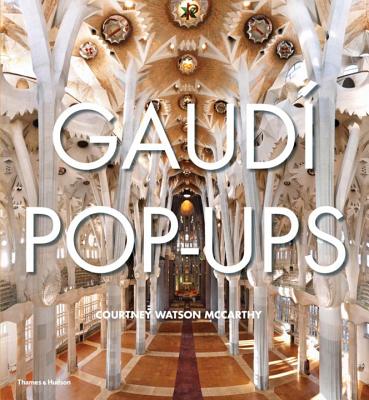 By Courtney Watson McCarthy (By (artist))

Specially created pop-ups explore the vision and creations of this seminal architect.

“Those who look for the laws of Nature as a support for their new works collaborate with the creator.” —Antoni Gaudí

For over a century the fantastical works of the Catalan architect and designer Antoni Gaudí have enraptured visitors to the city of Barcelona. Gaudí’s creations reflected his abiding passion for nature and religion, as well as his meticulous attention to detail. Perhaps no other architect has become so synonymous with the aesthetic style of a city. Gaudí Pop-Ups celebrates the unique style of this visionary architect with pop-ups of some of his most famous creations. The inventive paper constructions of Courtney Watson McCarthy bring these spectacular works to life in a new and fascinating way that enables us to further appreciate the genius of Gaudí.

Courtney Watson McCarthy is a paper engineer and graphic designer. With a degree in theatrical scenic design, she worked as a model builder and designer in a variety of elds before discovering the magic of movable books. From the time she dissected her rst pop-up book, determined to solve the riddle of how it worked, she was hooked. After experimenting with cards and other small projects, she went on to design and engineer Eye Magic, M.C. Escher Pop-Ups, New York Times—acclaimed Gaudi´ Pop-Ups, Pop-Up Numbers, Dali´ Pop-Ups, and Hokusai Pop-Ups. She lives in the Hudson Valley with her husband and two daughters.

You are as close to Barcelona as you can be without going there.

The inventive paper constructions of Courtney Watson McCarthy bring these spectacular works to life in a new and fascinating way that enables us to further appreciate their genius.
or
Not Currently Available for Direct Purchase
Copyright © 2020 American Booksellers Association